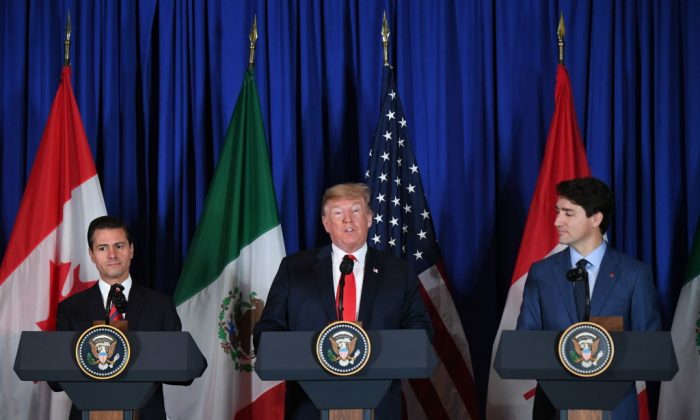 USMCA to Boost US Economy and Jobs, Trade Panel Finds

WASHINGTON—The new trade agreement between the United States, Mexico, and Canada, called the USMCA, will have a positive impact on the U.S. economy and employment, according to an independent analysis by the U.S. International Trade Commission (ITC).

The long-anticipated analysis is an important step in obtaining congressional approval for the agreement.

The commission’s 379-page report, released on April 18, examines the expected effects of the USMCA on the United States’ economy, exports, imports, and jobs. The new trade pact would raise the United States’ real gross domestic product by $68.2 billion, or 0.35 percent, and create 176,000 new jobs, according to the report.

“There can be no doubt that the USMCA is a big win for America’s economy,” U.S. Trade Representative Robert Lighthizer said in a statement.

“With the USMCA, we will have stronger growth, more trade, and more jobs—particularly in manufacturing.”

The agreement likely will have a positive impact on all U.S. sectors, according to the ITC report, but manufacturing will likely be the primary beneficiary.

U.S. manufacturing will have the largest percentage gains in output, exports, wages, and employment, and in absolute terms, the U.S. services sector will be the biggest winner both in output and employment.

The new trade deal was signed by the leaders of the United States, Canada, and Mexico on Nov. 30 to replace the more-than-two-decades-old North American Free Trade Agreement (NAFTA). The new pact must be approved by the legislative body of each country to take effect.

With new rules of origin, the USMCA is estimated to have a significant impact on the U.S. automotive sector. The agreement will boost investments, parts purchases, and jobs in the first five years after implementation, according to a separate analysis by the Office of the U.S. Trade Representative (USTR).

The analysis shows that the USMCA will boost automotive manufacturing investments in the United States by $34 billion over the next five years.

“That is equivalent to 50 percent of everything that the international automakers have invested in North America since NAFTA was enacted 25 years ago,” said a senior USTR official during a press call. “So 50 percent of that, we expect over the next five years.”

The deal will also provide $23 billion in additional sales of American-made automotive parts annually and nearly 76,000 new jobs in the U.S. automotive sector over a five-year period. USTR’s analysis is based largely on information collected from North American automakers.

The agreement provides new incentives for auto companies to locate their supply chains in the United States. The new terms will enable more capital investment in the United States, more sourcing of U.S. auto parts, and more high-paying jobs, according to the USTR official.

Under the new deal, 75 percent of auto content must come from North America, up from the original threshold of 62.5 percent. The higher threshold will keep more parts from other regions out, while boosting production and jobs in the region.

The agreement also incentivizes the use of high-wage labor in auto manufacturing, requiring 40 percent of each car and 45 percent of each truck to be made by workers earning at least $16 an hour in order to qualify for duty-free treatment.

This provision will boost production in the United States and Canada, since the average manufacturing wage in Mexico is around $2 to $3 an hour, said the USTR official.

“This is what we expect the impact of these changes to be over the next five years, over the short term,” he said. “But the impact of these automotive rule changes really is going to be the most profound over the long run, because right now, the companies are making major investment decisions about where to locate supply chains for the autonomous vehicles and electric vehicles.”

The USTR analysis notes that the USMCA is already attracting new auto manufacturing investments to the United States. Fiat Chrysler, Ford, General Motors, Toyota, Volkswagen, and SK Innovation have announced investments worth nearly $15.3 billion that were partly influenced by the need to comply with the new rules of origin in the USMCA.

Supporters of the agreement hope that lawmakers will approve the USMCA this summer or at least before the August recess.

However, Democrats, who now control the House, have indicated they won’t vote for the agreement. They have called for stronger enforcement provisions and tougher language on labor and environmental standards.

Speaker of the House Nancy Pelosi (D-Calif.) said at a Politico event on April 2 that the House would consider the deal if Mexico passed and implemented major labor law reforms.

The Mexican Chamber of Deputies on April 12 passed labor-reform legislation that overhauls Mexico’s current labor union structure and fully complies with the USMCA, according to Mexican officials. The bill has now moved on to Mexico’s Senate, which is expected to approve the legislation by the end of this month.