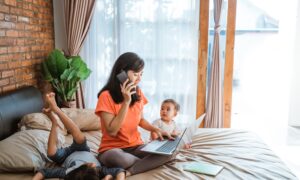 Swing trading is a strategy that should be considered when markets are not seen in breakout mode. Instead, the proper conditions are seen in clearly defined uptrends or downtrends. One of the easiest aspects of this type of trading is the fact that identifying the overall trend is relatively simply, as you will mostly be looking for a series of lower highs and lower lows (in a downtrend), or higher highs and higher lows (in an uptrend) that follow in succession.

It can be more difficult, however, to identify the reversal points within these trends but luckily there are many tools available to accomplish this. “In addition to the charting formations that typically exemplify reversals such as the candlestick patterns or retracements to Fibonacci levels,” said Haris Constantinou, currency analyst at TeleTrade , “traders can also employ indicator readings to identify when currency prices have become overbought or oversold.” Some examples of the tools that display these conditions include the Relative Strength Index or the Moving Average Convergence Divergence (MACD), and price calculators will help to show areas where swing reversals are starting to occur. But what exactly will we be looking for in these indicator readings, and how can these calculations help us in identifying swing reversal trades?

Let’s use the Relative Strength Index (RSI) as an example. In an uptrend, ultimately what we are trying to to is capitalize on the underlying positive momentum in a currency. But since these are swing trades (and not simple trend trades) we will be looking for areas where prices have actually become oversold within that trend. So, if price activity has started to drop within the downtrend, we will want to look at shorter term time frames and identifying areas where prices have reached oversold territory, as measured by the RSI.

Once prices have become oversold within an uptrend, the occurrence should be viewed as a critical development for swing traders as it suggests that prices are ready to end their short term declines and resume the longer term uptrend. In a downtrend, ultimately what we are trying to to is capitalize on the underlying negative momentum in a currency. So, we will be looking for areas where prices have actually become overbought within that trend. If price activity has started to rise within the uptrend, we will want to look at shorter term time frames to identify areas where prices have reached overbought territory, as measured by the RSI. When this occurs, we can see areas where swing traders would be looking to establish new short positions in order to capitalize on the longer term negative momentum in the currency.