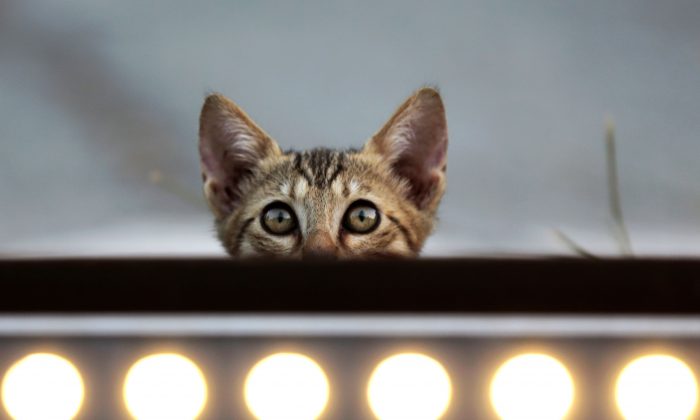 A street kitten looks out from behind a panel of lights along the Old City of the Cypriot capital Nicosia on Aug. 4, 2018. (Hasan Jamali/AFP/Getty Images)
US News

Scientists at the United States Department of Agriculture (USDA) have announced they are putting a stop to a controversial research program critics have dubbed a “kitten slaughterhouse.”

Since 1982, researchers at the USDA’s Agricultural Research Services lab have been infecting cats with toxoplasmosis—a potentially deadly parasitic illness.

The cats were fed infected meat, and the parasite’s eggs harvested for use in experiments designed to give scientists a leg-up in fighting the food-borne disease.

The animals were later euthanized.

USDA officials announced on April 2 that this practice is now over. In a statement, the USDA said its “toxoplasmosis research has been redirected and the use of cats as part of any research protocol in any ARS laboratory has been discontinued and will not be reinstated.”

https://t.co/8bi7bKZP61 “the USDA’s kitten slaughterhouse has finally been relegated to the litterbox of history.”

The USDA also said that following a public outcry over the research program, the department had already earlier put a halt to killing cats.

“In May 2018, after hearing the feedback of our customers and stakeholders, USDA took several actions, including commissioning external and internal scientific reviews that assessed the agency’s involvement in this research area and the feasibility of adoption for cats used in the research.

“Additionally, no cats have been infected with toxoplasmosis pathogens or euthanized since September 2018.”

Veterinary groups cited by the BBC said since toxoplasmosis is treatable, the cats could have been put up for adoption rather than put down.

The USDA said, however, that an independent review indicated only cats that had never been infected would be safe to adopt out.

“An external independent panel charged with reviewing the safety of adopting the cats unanimously agreed that cats infected with toxoplasmosis pathogens should not be placed for adoption.”

The 14 remaining cats on the program that have never been infected with the disease are to be adopted by USDA employees.

Activists at the White Coat Waste Project (WCW) campaigned against the so-called “kitten slaughterhouse,” arguing the research program led to the unnecessary death of thousands of cats.

The organization noted in a statement on its website that the “WCW first exposed the USDA’s secretive 37-year-old kitten experimentation laboratory in May 2018 using the Freedom of Information Act, and launched a grassroots and lobbying campaign to end the wasteful program that wasted over $22 million and killed and incinerated more than 3,000 healthy kittens.”

A bombshell WCW report released in March titled “USDA Kitten Cannibalism” claimed that the department bought hundreds of dead cats and dogs in China and other countries and fed them to its lab cats.

The USDA didn’t address “cat cannibalism” in its statement. The department said its toxoplasmosis research had come to an end after helping “to cut the prevalence of T. gondii [toxoplasmosis] by as much as 50 percent in the United States.”

In March, bipartisan legislation, dubbed the Kitten Act, was introduced in Congress to end the USDA program, describing it as “taxpayer-funded kitten slaughter.”

“With all the awful reports coming out, it was clear that Americans opposed USDA’s cruel testing on kittens. This is a decisive victory against government animal abuse and wasteful spending,” Rep. Brian Mast (R-Fla.), a cosponsor of the House bill, told NPR.

My colleagues and I signed onto the #KITTENAct to help put a stop to the cruel and unnecessary experiments on #cats at @USDA labs. Today the #USDA announced that it would cease these experiments. #EndAnimalCrueltyhttps://t.co/bbOUMGdHrl

Sen. Jeff Merkley (D-Ore.) introduced the legislation to the Senate.

I commend the USDA for their decision to end this type of testing on kittens. They listened to the people and responded appropriately to our concerns. This is how our institutions, our government, and our democracy should and must work. https://t.co/l9TJ7ifTRW

“The USDA made the right decision today, and I applaud them for their willingness to change course,” Merkley said in a statement cited by NPR. “It’s a good day for our four-legged friends across America.”

Jimmy Panetta (D-Calif.), another cosponsor of the bill, responded to the USDA announcement, saying, “I commend the USDA for their decision to end this type of testing on kittens. They listened to the people and responded appropriately to our concerns. This is how our institutions, our government, and our democracy should and must work.”

Anthony Bellotti, the founder of the White Coat Waste Project, was cited by NBC as calling the move “a historic victory for taxpayers and animals.”

“We applaud the USDA for its wise decision to permanently end its taxpayer-funded kitten experiments and adopt out the survivors,” Bellotti said and expressed satisfaction that “the USDA’s kitten slaughterhouse has finally been relegated to the litterbox of history.”

According to the Centers for Disease Control and Prevention, toxoplasmosis is a leading cause of death attributed to food-borne illness in the United States.

“More than 40 million men, women, and children in the United States carry the toxoplasma parasite,” the CDC notes, “but very few have symptoms because the immune system usually keeps the parasite from causing illness.”

The CDC warns that for pregnant women and people with weakened immune systems, toxoplasmosis infections could have “severe consequences.”