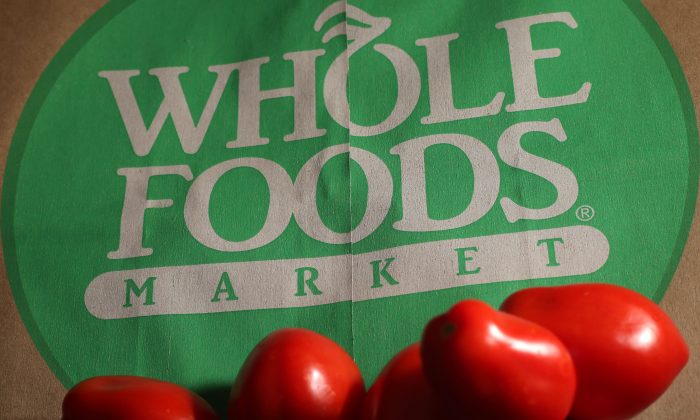 FILE - This July 29, 2013 file photo shows produce on a Whole Foods paper bag in Andover, Mass. Large food companies are trying to head off state-by-state efforts to enact mandatory labeling of genetically modified ingredients by proposing new voluntary labels nationwide. The food industry and farm groups are pushing Congress to pass legislation that would require the Food and Drug Administration to create guidelines for the new labels, which food manufacturers could use. (AP Photo/Elise Amendola, File)
Tech

An article saying that the U.S. Department of Agriculture (USDA) forced Whole Foods to accept a deal with Monsanto isn’t real.

“In the wake of a 12-year battle to keep Monsanto’s Genetically Engineered (GE) crops from contaminating the nation’s 25,000 organic farms and ranches, America’s organic consumers and producers are facing betrayal,” the article, published on Whydontyoutrythis.com, last year. The article went viral this week.

Whydontyoutrythis.com features a number of dubious articles, including one saying the World Bank is being controlled by a “second species,” and it makes reference to several popular conspiracy theories involving aliens.

Whole Foods released a statement saying the rumors about it being bought out by Monsanto aren’t true.

“Stop the insanity! I help with customer inquiries here at Whole Foods Market and we’ve been hearing some wild, off-base stories from folks around the country lately,” the statement reads. “For brevity’s sake, I’m going to list them here in hopes of dispelling these rumors.”

“Wrong again! As long as GMO crops have been in this country, GMOs have been in the US food supply. The most effective action we can take now is to label the food that DOESN’T include GMOs. That’s why we’ve enrolled our 365 Everyday Value and 365 Organic product line in the Non-GMO Project Verification Program, and have encouraged our branded vendors to do the same – and many, many have,” it says.