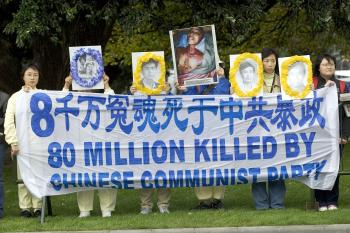 Protesters wait outside Parilament buildings for arrival of Chinese Premier Wen Jiabao at on April 6, 2006 in Wellington, New Zealand. The recent U.S.-China human rights dialogue presents an opportunity to reflect on human rights in China, in the context of country's rise. (Marty Melville/Getty Images)
Opinion

Matthew Robertson
Print
The recently concluded U.S.–China human rights dialogue presents an opportunity to reflect on the nature of bilateral engagement with China. Just as intended when such dialogues were masterminded, the recent discussion was a quiet, deferential affair with no outcome: an empty gesture.

This was part of a shift in the Chinese Communist Party’s response to those who criticized its human rights practices after the Tiananmen Massacre of 1989. Previously, governments had addressed rights violations in China with a combined approach of diplomacy and public censure, bilaterally, and multilaterally.

What changed was a cessation of public censure and multilateral action as a quid pro quo for bilateral dialogue. Engagement became the buzzword. The driver of these changes was, of course, Beijing, “with the objective of eliminating multilateral pressure,” observes NGO, Human Rights in China (HRIC).

Making dialogues bilateral rather than multilateral has numerous implications. As early as 1998 HRIC, in its “From Principle to Pragmatism” report, noted these deleterious effects. They include that action or inaction on human rights will be more closely linked to trade relationships, as countries sitting across the table from China will be unwilling to jeopardize trade to pursue human rights outcomes; a lack of progress benchmarks; the human rights of Chinese citizens becoming a bargaining chip; the shutting out of NGOs and activist groups, who are most familiar with experiences of human rights abuse; and as Dr. Ann Kent of the Australian National University put it, the whole process becomes “secretive, nontransparent, unaccountable, and totally ineffective.”

Despite the denials from the governments involved, the proponents for the bilateral approach among European Union countries are known as the “Airbus Club,” according to HRIC, because of their hope that a softly-softly approach to Beijing on human rights will increase the chances of getting Chinese orders for the European aircraft manufacturer.

The Chinese regime is deft in its use of big contracts to have Western countries stop public criticism of its human rights violations. Over the 10 years since the bilateral dialogues began, this has become so much a feature of international relations as to be taken for granted.

To the careful observer, the CCP’s move to have Western governments abandon a multilateral approach for a bilateral one, with all its attendant problems of opacity and ineffectualness, bears an uncanny resemblance to the same divide-and-conquer tactics practiced against domestic enemies. The Party has always made deft use of the weaknesses of its enemies, and as such few groups in China have managed to mount any meaningful, sustained resistance to it. Their constituents are isolated and destroyed one after the other.

To cite one example, in dealing with labor unions the Party implants spies, breeds an atmosphere of mistrust, differentiates levels of punishment per quota of cooperation, effectively cutting deals so individuals sell each other out, and it punishes mercilessly those identified as “ringleaders,” while others receive minimal sanctions. The group crumbles. Similar dynamics of isolation and pressure were used against intellectuals, “rightists,” and “counterrevolutionaries” in the 1950s and 1960s, and are used against Tibetans and Falun Gong practitioners today.

As individuals facing off against the Party, none stand a chance. As a group, there is some hope to gain concessions and compel change—because compulsion is the only thing the CCP knows. The pusillanimous acquiescence of Western governments to the Party’s strong-arm tactics, then, is a clear backward slide.

It is now much as professor of East Asian studies at Princeton, Perry Link, wrote in "The Anaconda in the Chandelier": “In sum, the Chinese government's censorial authority in recent times has resembled not so much a man-eating tiger or fire-snorting dragon as a giant anaconda coiled in an overhead chandelier. Normally the great snake doesn't move. It doesn't have to. It feels no need to be clear about its prohibitions. Its constant silent message is ‘You yourself decide,’ after which, more often than not, everyone in its shadow makes his or her large and small adjustments—all quite ‘naturally.’”