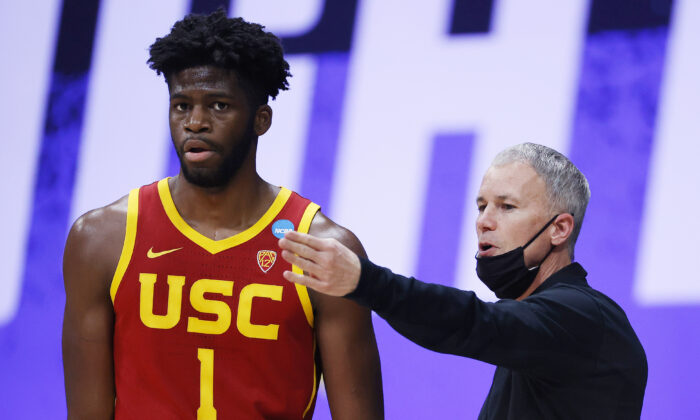 USC Holds Off Temple in Second Half for 76–71 Victory

Leading 55–32 with about 17 minutes left, USC went without a field goal over nearly eight minutes as Temple cut the score to 58–54 while Khalif Battle scored 11 points, nine via the 3-pointer. Isaiah Mobley finally got USC a 3-pointer with 9:25 left and the Trojans clung to their lead.

A 3-pointer by Zach Hicks followed by a Battle free throw cut the lead to three with 9.9 seconds left but Peterson made two free throws to seal the outcome.

Battle, who had 22 points in a season-opening win over Maryland-Baltimore County, finished with 26 points and five 3-pointers for Temple (1–1).

USC shot 59 percent in the first half to charge to a 19-point lead while Temple shot only 31 percent and was only 1 of 10 from the arc.

The Owls led over much of the opening nine minutes but Ethan Anderson hit a 3-pointer to snap a tie and, after a Temple bucket, the Trojans went on a 13–0 run with five from White and four from Ellis. USC finished the final three minutes of the half on a 13–5 run, sparked by five points from Peterson, to lead 46–27 at the break.

USC fell off to 47 percent shooting for the game but Temple shot only 38 percent. Neither team was sharp at the free-throw line, USC making 18 of 27 and the Owls 15 of 28. While Temple had a slight rebounding edge and 22 second-chance points to nine for the Trojans, USC dominated 42–20 in the paint.