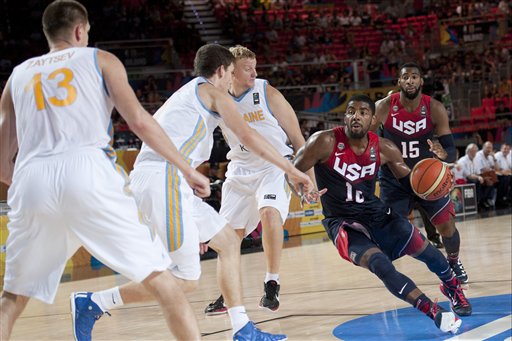 Kyrie Irving of the US goes for the basket between Ukraine players during the Group C Basketball World Cup match, in Bilbao northern Spain, Thursday, Sept. 4, 2014. The 2014 Basketball World Cup competition take place in various cities in Spain from Aug. 30 through to Sept. 14. United States won 95-71. (AP Photo/Alvaro Barrientos)
US

The United States will take on Mexico on Saturday in the FIBA World Cup.

The game will be broadcast on ESPN in the United States and Fox Sports and Televisa in Mexico.

Live streaming will be available via Watch ESPN, Fox Sports, and LiveBasketball.TV.

The United States steamrolled through group play, being one of only a handful of teams that had perfect records and winning its five games by an average of 33.2 points.

Mexico barely made it into the knockout rounds, finishing group play with a 2-3 record.

“The fast-breaking USA have size, quickness, perimeter shooters, rebounding and most of all, excellent defense. The team’s most valuable player thus far is power forward Kenneth Faried. A 2.03m (6ft 8in) power forward, Faried has averaged 13.8 points per game in 21.8 minutes per game while shooting 79.1 percent from the field. He has been a dominant player on the boards, averaging 7.8 rebounds,” previewed the FIBA website.

“The USA have not shown any weaknesses, but one thing is clear. They want to play uptempo and in no way will Mexico want the pace to be too quick. Mexico have already achieved their pre-tournament aim of advancing from the Group Phase. Gustavo Ayon, the team’s center and last year’s FIBA Americas Championship Most Valuable Player, has been as good as advertised, averaging 15.8 points and 7.5 rebounds.”

The United States’ starting point guard Kyrie Irving had a hard fall during the last game and hurt his hip, but coaches say he’s ready to go for the game against Mexico.

Team USA is widely expected to win and take on the winner of Slovenia and the Dominican Republic in the quarterfinals.

The winner of that game will play one of these four teams in the semifinals–New Zealand, Lithuania, Turkey, or Australia.

The final game is widely expected to be the United States and Spain, though there are enough strong teams–such as Brazil, Greece, and that the expected showdown could very well not happen.

In this Aug. 12, 2012, file photo, Spain’s Pau Gasol, right, drives past United States’ Kevin Love, left, to score during the men’s gold medal basketball game at the 2012 Summer Olympics in London. The U.S. national team, without LeBron James, Kevin Durant, Kevin Love and Paul George, is good enough to win the FIBA Basketball World Cup but vulnerable enough to lose. One team that could beat the Americans is Spain, which gave the U.S. close games in the last two Olympics and now is home. (AP Photo/Eric Gay, File)

BILBAO, Spain—They set out in different directions, with every reason to believe they are headed for the same destination.

The U.S. and Spain, who have met in the last two Olympic gold-medal games, have been the class of the Basketball World Cup. A matchup that was an expectation coming into the tournament seems closer to a guarantee when watching them now.

Both went 5-0 and were hardly challenged in group play, Spain powering past what was considered a difficult pool and the U.S. sweeping through the weakest. They look so good that it’s hard to envision anyone beating one of them except the other.

“They are playing well, but we can’t think about games that could come in the future,” Spain guard Ricky Rubio of the Minnesota Timberwolves said. “We have to concentrate on the game at hand.”

Besides, they are still a long way from seeing each other — on the calendar and the map.

The round of 16 opens Saturday with a new format that has the teams divided between two sites. The U.S. is back in Barcelona, where the Dream Team rolled to Olympic gold and a place in history, while Spain awaited a champion’s welcome in its capital of Madrid.

If the Americans reach the final, they would then travel to Madrid, perhaps with Spain waiting for them. If so, only then would U.S. coach Mike Krzyzewski start watching the Spanish.

He’s not doing it yet, same as he doesn’t check in on some team Duke might not play in the NCAA tournament until the matchup is secured.

“Because you may never play those teams,” Krzyzewski said. “We’re not a fan, we’re coaches and if I was a fan I would watch every game. I’m a coach and I watch my next opponent and the team I’m responsible for. I’ve done that for 40 years, so we’ve been pretty successful doing it that way.”

The U.S. plays Mexico on Saturday. Slovenia faces the Dominican Republic in the other game in Barcelona, while on Sunday, Lithuania meets New Zealand, and Turkey plays Australia.

Greece also was unbeaten in the group stage, while Lithuania won a tiebreaker over Slovenia to win Group D after both went 4-1.

Any of them could potentially wreck a U.S.-Spain final on Sept. 14, which is why Krzyzewski’s players have repeatedly said they’re not thinking about the team that the Americans edged in the 2008 and 2012 Olympic finals.

But those who do see a team that easily handled medal contender Brazil and European champion France in the first round, with chemistry from playing years together and an international stalwart in Chicago Bulls forward Pau Gasol, the MVP of Spain’s 2006 world title run who is having another strong tournament.

“Spain is a very, very good team. They’re very good,” said Ukraine coach Mike Fratello, whose team lost to the U.S. on Thursday. “They’re big, they’ve played together for so long, the majority of the team, and they do things that you have to do. They pass well, they’re skilled. To play the U.S. you have to be skilled, otherwise you have too many turnovers from not being able to pass and catch. Small things. They don’t do that.

“They have size to go on the glass and I’m sure in their minds, playing in their home country they feel they have a very, very good chance to play against them.”

Fratello’s team was one of three in the group stage that hung with the Americans for more than a quarter, which rarely happens against truly dominant U.S. teams. This one isn’t, partly because it’s so young, a group whose average age of about 24 years old makes it the Americans’ youngest since pros were first used in the 1992 Olympics.

Yet Fratello, a former NBA coach and current TV analyst, thinks the Americans will start playing better when better teams are in front of them.

“But don’t count the U.S. out, because they have resiliency, they have toughness about them, they have a great coaching staff,” he said, “and when they get to a point where they’re playing teams that they know are a major challenge, they’re going to raise their game a little bit and get after it.”