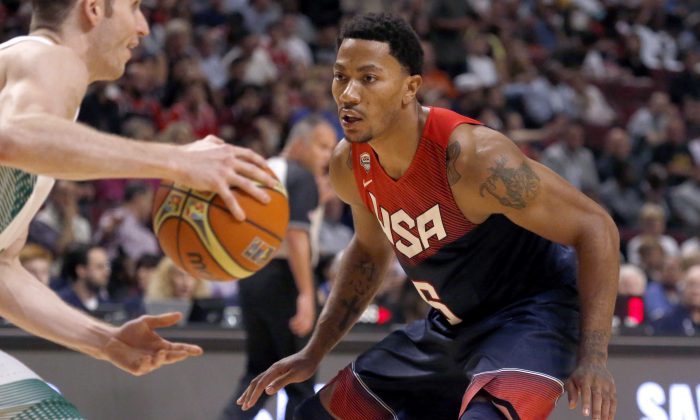 United States' Derrick Rose (6), of the Chicago Bulls defends against Brazil's Marcelo Huertas, during an exhibition game between the US and Brazilian national teams Saturday, Aug. 16, 2014, in Chicago. (AP Photo/Charles Rex Arbogast)
US

Team USA takes on the Dominican Republic on Wednesday, August 20 as it tries to finalize the roster ahead of the FIBA World Cup.

The exhibition game at Madison Square Garden in New York City is slated to tip-off at 7 p.m. EDT.

The game will be broadcast on NBA TV–a change from the previous listing that had it airing on ESPN 2.

That means a live stream won’t be officially available.

Derrick Rose was a gametime decision, and he will not play.

He’s had treatment on his surgically repaired knee over the past couple days.

He is expected to practice on Thursday and play in the exhibition against Puerto Rico on Friday.

The game should include more action for the players who either didn’t get off the bench or didn’t get much playing time last game–Gordon Hayward, DeMar DeRozan, Andre Drummond, Chandler Parsons, Kyle Korver, and Damian Lillard.

DeMarcus Cousins is playing tonight after missing the Brazil game due to an injury.

Coach Mike Krzyzewski is working on finalizing the roster from the current 16 players down to 12. Curry, Harden, Faried, and Davis are all considered locks, as is Irving, according to ESPN.

Team USA will also include at least one big man besides Faried and Davis as well as several sharpshooters coming off the bench. Korver is the best shooter on the team, although Klay Thompson and Parsons are great shooters as well.

Fresh inclusion Rudy Gay is also angling to make the squad, following the injury to Paul George and the departure of Kevin Durant.

Here’s the full U.S. roster at the moment.