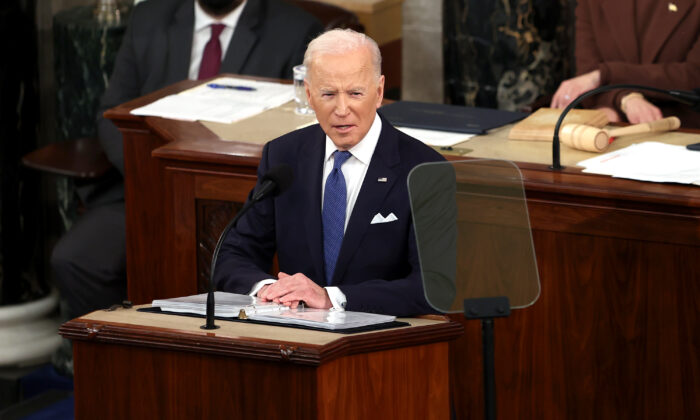 U.S. President Joe Biden gives his State of the Union address during a joint session of Congress at the U.S. Capitol in Washington on March 1, 2022. (Julia Nikhinson-Pool/Getty Images)
Executive Branch

US Will Bar Russian Planes from American Airspace: Biden

At the State of the Union address on Tuesday, President Joe Biden announced that the United States will join several other western nations in barring Russian aircraft—including commercial and private flights—from entering U.S. airspace.

“Six days ago, Russia’s Vladimir Putin sought to shake the very foundations of the free world,” Biden said. “He thought he could roll into Ukraine and the world would roll over. Instead, he met with a wall of strength he never anticipated or imagined—he met the Ukrainian people.”

“Yes, we the United States of America stand with the Ukrainian people,” Biden continued. “Throughout our history, we’ve learned this lesson: When dictators do not pay a price for their aggression, they cause more chaos. They keep moving, and the cost, the threats to America and to the world keeps rising.

“That’s why the NATO alliance was created, to secure peace and stability in Europe after World War II. The United States is a member along with 29 other nations.”

Biden asserted the often-repeated claim that the Kremlin is constantly attempting the intervene in U.S. politics: “Putin’s latest attack on Ukraine was premeditated and totally unprovoked. He rejected repeated, repeated efforts at diplomacy. He thought the West and NATO wouldn’t respond, he could divide us at home, in this chamber, in this nation.”

There is bipartisan consensus among members of Congress condemning the invasion and supporting efforts to impose tough sanctions on Russia.

“He thought he could divide us in Europe as well. But Putin was wrong,” Biden said. “We are ready, we are united, and that’s what we did—we stayed united. We prepared extensively and carefully. We spent months building coalitions of other freedom-loving nations in Europe and the Americas … to the Asian and African continents—to confront Putin.”

“Now that he’s acted,” Biden continued, “the free world is holding him accountable, along with 27 members of the European Union including France, Germany, Italy, as well as countries like the United Kingdom, Canada, Japan, Korea, Australia, New Zealand, and many others—even Switzerland [which has historically remained neutral in conflicts]—are inflicting pain on Russia and supporting the people of Ukraine. Putin is now isolated from the world more than he has ever been.

“Together, along with our allies, we are right now enforcing powerful economic sanctions. We’re cutting off Russia’s largest banks and international financial system, preventing Russia’s central bank from defending the Russian ruble, making Putin’s $630 billion war fund worthless. We’re choking Russia’s access to technology that will sap its economic strength and weaken its military for years to come. Tonight, I say to the Russian oligarchs and the corrupt leaders who built billions of dollars off this violent regime: no more.

The U.S. Department of Justice, Biden announced, “is assembling a dedicated Task Force to go after the crimes of the Russian oligarchs. We’re joining with European allies to find and seize their yachts, their luxury apartments, their private jets.”

“We’re coming for you ill-begotten gains, and tonight, I’m announcing that we will join our allies in closing off American airspace to all Russian flights, further isolating Russia and adding an additional squeeze on their economy.”

Biden also vowed that the United States would not send troops to Ukraine—which is not a NATO member—assuaging fears that the conflict could escalate into another world war. However, Biden said that troops will be deployed to NATO-allied nations bordering Ukraine.

“Our forces are not engaged and will not engage in the conflict with Russian forces in Ukraine. Our forces are not going to Europe to fight Ukraine,” Biden said, “but to defend our NATO allies in the event that Putin decides to keep moving west. For that purpose, we have mobilized American ground forces, air squadrons, ship deployments to protect NATO countries including Poland, Romania, Latvia, Lithuania, and Estonia. And as I’ve made crystal clear, the United States and our allies will defend every inch of territory that is NATO territory with the full force of our collective power, every single inch.”