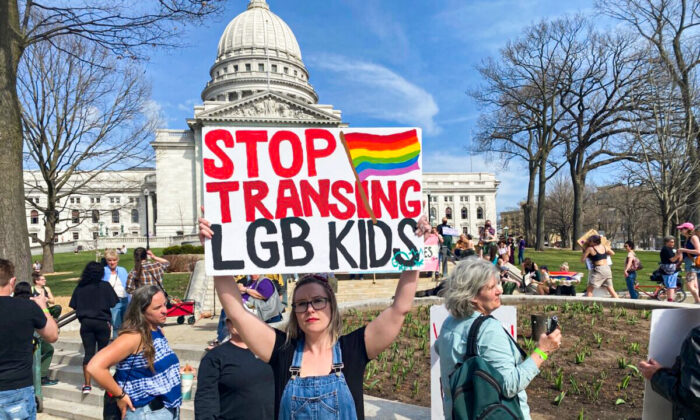 A protester denounces the "transing" of children at the state capitol in Madison, Wisconsin on April 23, 2022. (Courtesy of Charlie Jacobs (pseudonym))
Values and Tradition

Amid pressure from the media to accept transgenderism, almost two-thirds of American voters believe that it’s not a healthy human condition, and more than seven out of 10 believe elementary-age children shouldn’t be taught about sexual identity and sexual behavior, according to a new national poll.

The survey by McLaughlin and Associates, which was commissioned by Summit Ministries of Manitou Springs, Colorado, whose website is Summit.org, was conducted online with 1,000 likely general election voters nationwide from April 22 through April 26. The poll is considered to have a margin of error of about 3 percent, at a 95 percent confidence interval.

The survey also found that 34 percent stay silent on the issue so they don’t offend others, but 30 percent are willing to speak out.

“Everywhere Americans look, the media and education culture is bombarding us with relentless, daily messages in support of Transgenderism without limits. Despite this intensity, these stunning numbers show plainly that the vast majority of Americans aren’t buying what they’re being sold. A huge majority of Americans–for example–don’t think this issue belongs anywhere near our kids,” he said in a statement.

“Yet, we also see a powerful chilling effect that this propaganda is having on society, as this research shows that tens and tens of millions disagree with what they see but are afraid to say anything about their views. We trust this poll will spark all-important conversations so we can properly address these issues as a nation.”

There were areas in which poll respondents were more unified in their opinions.

Most voters don’t want young children to be taught about sexual behavior and gender ideology.

Of respondents to the poll, 72 percent of voters who have an opinion on the issue don’t believe schools should teach about sexual identity and sexual behavior with elementary-age children. Specifically, 42 percent believe such teaching is inappropriate in a school setting, and 30 percent believe it is dangerous and could lead to children being groomed for sexual encounters at a young age.

The survey also found that 28 percent of voters with an opinion on the issue believe teaching young children about sexual behavior and gender ideology is a perfectly appropriate use of instruction time.

The Summit survey follows a week after a separate survey by the American Principles Project found that 56 percent of voters in swing states are in favor of banning cross-sex hormones, puberty blockers, and physical sex-change surgeries for children under the age of 18 who identify as transgender, as The Epoch Times previously reported.