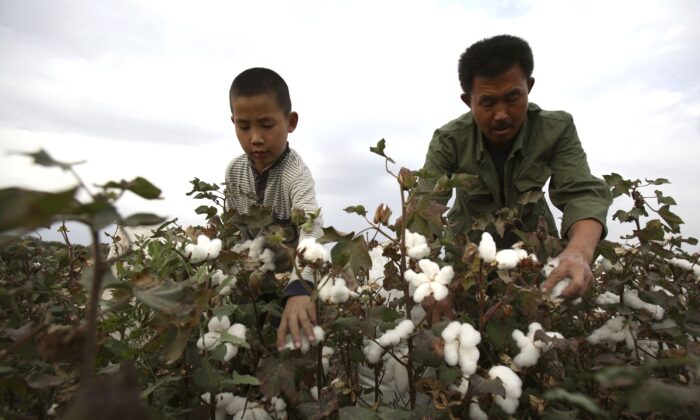 A farmer and his son pick cotton in a cotton field in Shihezi of Xinjiang, China on Sept. 22, 2007. (China Photos/Getty Images)
China Human Rights

US Urges China to End Uyghur Forced Labor in Xinjiang

The United States calls on China to take steps to end the racial and religious discrimination in Xinjiang identified in an annual report by the International Labour Organization (ILO) .

China is utilizing vocational training and rehabilitation centers for “political re-education” based on administrative detention, according to the 2022 report, released by the ILO’s Committee of Experts on the Application of Conventions and Recommendations on Feb. 10. It spotlighted “a widespread and systematic” program involving the extensive use of forced labor of the Uyghur and other Muslim minorities for agriculture and industrial activities throughout Xinjiang.

While employed outside of the region, “[Uyghur] workers lack of freedom of movement, remaining confined to dormitories, and required to use supervised transport to and from the factory. They are subject to impossible production expectations and long working hours,” the report reads.

“Where wages are paid, they are often subject to deductions that reduce the salary to almost nothing,” said the ILO, citing a global trade union organization. It called on China “to review, repeal, and revise its laws and practices of employment discrimination against racial and religious minorities in Xinjiang.”

In a Feb. 10 press release, the U.S. State Department welcomed the issuance and urged China to take the steps requested by the Committee of Experts, reiterating its call on Beijing to end its genocide and other abuses including forced labor of Uyghurs and other Muslim minorities in the far-west Xinjiang region.

The 870-page report (pdf) detailed observations by Brussels-based International Trade Union Confederation (ITUC) in the past few years, and alleged violations of trade union rights in practice on a national level in countries around the world.

“Some 13 million members of the ethnic and religious minorities in Xinjiang are targeted on the basis of their ethnicity and religion with a goal of social control and assimilation of their culture and identity,” said the report.

According to the ITUC, China called its suppression, featuring forced labor camps housing some 1.8 million Uyghur and others in the region, “poverty alleviation,” “vocational training,” “reeducation through labor,” and “de-extremification.”

Beijing calls Uyghurs “extremist terrorists “and emphasizes that these allegations are “politically motivated.”

Such camps are “central to an indoctrination program focused on separating and ‘cleansing’ ethnic and religious minorities from their culture, beliefs, and religion,” findings show. They are also “characterized by extraordinary hardship, lack of freedom of movement, physical and psychological torture, compulsory vocational training, and actual forced labor.”

Overseas travel, passport application, communicating with people abroad, or regularly praying can all lead to imprisonment, according to ITUC.

Beyond prisons, workplaces across Xinjiang and other parts of the country saw unjust treatment toward Uyghurs, including continuous physical and virtual surveillance, extended working hours, a squeeze on wages, and lack of free choices.

At least 80,000 Uyghurs and other ethnic minority workers, according to the report, were forcibly relocated to factories in eastern and central China under an official scheme named “Xinjiang Aid.” Those who are forced to leave their homes have to comply, otherwise they or their families will be punished with detention.

“Without these coercively arranged transfers, Uyghurs would not find jobs outside Xinjiang, as their physical appearance would trigger police investigations,” the report reads, citing ITUC.

“To facilitate the implementation of these schemes, the Government offers incentives and tax exemptions to enterprises that train and employ detainees; subsidies are granted to encourage Chinese-owned companies to invest in and build factories near or within the internment camps; and compensation is provided to companies that facilitate the transfer and employment of Uyghur workers outside the Uyghur Region.”

The Chinese Communist Party’s campaign against Uyghurs in Xinjiang has been labeled a “genocide” by nations and rights groups, including both the former and current United States administrations, and the parliaments from the United Kingdom, Canada, Netherlands, Lithuania, Belgium, and the Czech Republic.

Last December, the United States “placed trade and investment restrictions on dozens of Chinese entities over their role in weaponizing biotechnology and other U.S. innovations in order to bolster the Chinese military and to elevate its human rights abuses,” reported The Epoch Times.

Washington will stand by and work with its allies to end forced labor and strengthen international action against the ongoing crimes against humanity in Xinjiang, according to the Thursday statement.

The committee of the ILO, an independent body composed of 20 senior legal experts at both national and international levels, reviews the application of ILO Conventions, Protocols, and Recommendations by member states.

China joined the United Nations agency in 1919 as one of its founding member states.