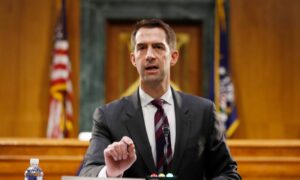 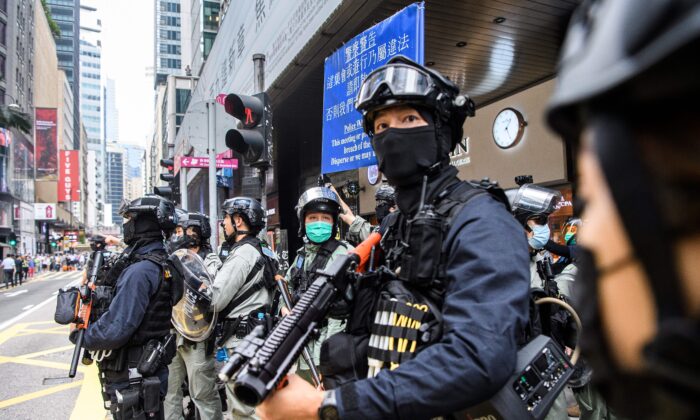 Riot police take part in a crowd dispersal operation in the Central district of Hong Kong on May 27, 2020. (Anthony Wallace/AFP via Getty Images)
HK Current Affairs

The Chinese regime fueled further international outcry after its rubber-stamp legislature officially endorsed a national security law on May 28 aimed at quashing dissent in Hong Kong.

Proclaiming Hong Kong a “bastion of freedom,” the United States and its major allies—UK, Australia, and Canada—issued a joint statement reprimanding Beijing’s move, warning that the law could jeopardize the city’s status as an international hub known for its rule of law and civil liberties.

The countries said the proposal, which bypassed Hong Kong’s legislature to directly ban any acts of “secession, subversion, and terrorism activities,” “lies in direct conflict with its [China’s] international obligations” and risks exacerbating existing conflicts in the city, where protests recently reignited.

At a London press conference following the news from China, U.K. foreign secretary Dominic Raab urged the Chinese regime to “step back from the brink and live up to its responsibilities as a leading member of the international community.”

If “China continues down this path,” the U.K. will grant greater visa rights for Hong Kong citizens who hold a BNO (British national overseas) passport by revoking their six-month visit limit, paving the way for them to resettle in the country, Raab said.

As many as 300,000 Hongkongers born before the former British colony reverted to Chinese rule in 1997 have such passports, according to the U.K. government.

“The US must hold China to account. The CCP’s decision today will have consequences for generations to come,” Sen. Marsha Blackburn (R-Tenn.) tweeted, referring to the Chinese Communist Party, hours after Beijing passed the controversial law. “Today we are all Hong Kongers,” she added.

Much of the law’s specifics will be unveiled in the coming months, but critics have warned that its implications will extend far beyond the city’s territorial limits.

“Two big lessons from what the Communist Party is doing to HongKong,” according to Sen. Marco Rubio (R-Fla.), is that the regime can “sign virtually any deal because if/when it suits them they will break any commitments they have made;” and “[w]hat they are doing today to HK is what they have in mind for Taiwan down the road,” he wrote on Twitter.

A day earlier, Secretary of State Mike Pompeo, citing “facts on the ground,” certified that Hong Kong was no longer autonomous from mainland China, and will not continue to warrant special treatment under U.S. law. These privileges, covering the areas of trade, investment, and immigration, have shielded Hong Kong from current U.S. tariffs on billions of dollars worth of Chinese goods.

It remains unclear if the Trump administration will proceed to revoke Hong Kong’s special privileges, which requires an executive order by the president.

“While the United States once hoped that free and prosperous Hong Kong would provide a model for authoritarian China, it is now clear that China is modeling Hong Kong after itself,” Pompeo said in a statement.

Under the Hong Kong Human Rights and Democracy Act passed last year, the State Department is required to annually assess whether Hong Kong has sufficient political independence to retain its status as a separate entity from mainland China.

“The PRC [People’s Republic of China] I think has tried to paint this as, they would respect the economic freedom in Hong Kong without feeling obligated to respect political freedom. You can’t have one without the other,” he told reporters in a telephone briefing.

The U.S. measures could be “across the spectrum,” including barring entry to responsible Chinese officials and imposing economic sanctions, he said, noting that he would not “forecast or limit what it could be.”

Hong Kong’s stocks fell by 0.7 percent at closing, underperforming most of Asia shares.

President Donald Trump is set to hold a press conference on China Friday. Earlier in the week, Trump said he would take action against Beijing should the law move forward, but declined to provide details.

In a show of support for the city, around 630 lawmakers from around the world have signed a joint letter decrying Beijing’s unilateral introduction of the national security law.

“The death of democracy in Hong Kong should be of grave concern to us all,” said Benedict Rogers, co-founder of U.K.-based advocacy group Hong Kong Watch in the letter.

“We hope that this international statement from policymakers across the political and geographic divide will send a clear message to Beijing that the world will not meekly consent to the dismantling of the ‘One Country, Two Systems’ Model overnight,” he said, referring to the framework which Beijing promised to rule Hong Kong while preserving its autonomy.

House Speaker Nancy Pelosi (D-Calif.) on Thursday said she was “disappointed” with the Trump administration’s conclusion about Hong Kong’s status, but that “there’s no other conclusion to come to.”

Beijing has been unusually quiet following the U.S. de-certification of Hong Kong and has not yet made public statements.

During a Thursday press conference after the ceremonial vote, China’s Premier Li Keqiang spared only 45 seconds to talk about the law and looked down at his papers three times.