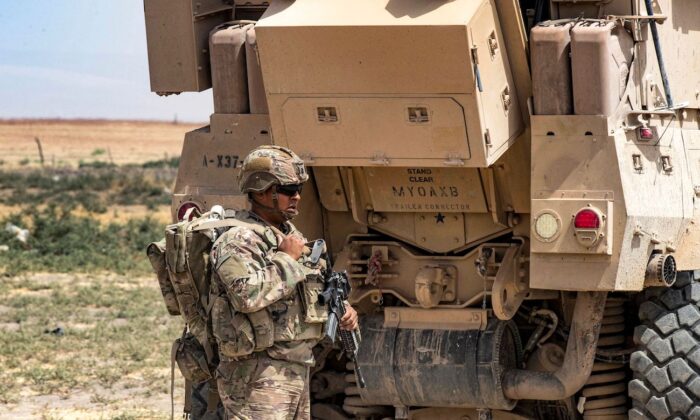 U.S. forces subsequently responded with attack helicopters, which destroyed three vehicles as well as the equipment used to launch the rockets, CENTCOM said in a statement.

“Initial assessments indicate that two or three suspected Iran-backed militants conducting one of the attacks were killed during the U.S. response.”

CENTCOM on Aug. 23 said that U.S. forces had conducted targeted airstrikes on Iran-backed militia to protect U.S. forces in Syria. One of the Pentagon’s 11 unified combatant commands, CENTCOM is responsible for protecting U.S. security interests in an area stretching from the Horn of Africa to Central Asia.

Just hours after the U.S. strikes on Aug. 23, two U.S. military locations in northeastern Syria near large oil and gas fields were hit with rocket fire. CENTCOM said that starting at about 7:20 p.m. local time, “several rockets” hit near Green Village and the Conoco gas field in Deir el-Zour.

Deir el-Zour is a strategic province that borders Iraq and contains oil fields. Iran-backed militia groups and Syrian forces control the area and have often been the target of Israeli warplanes in previous strikes.

“One U.S. service member in Mission Support Site Conoco was treated for a minor injury and has been returned to duty. Two others are under evaluation for minor injuries,” CENTCOM said on Aug. 24.

According to CENTCOM, U.S. forces used AH-64 Apache helicopters on Aug. 24 to respond to the Syria rocket attacks.

“The response was proportional and deliberate. The United States does not seek conflict with Iran, but we will continue to take the measures necessary to protect and defend our people.”

It said that the U.S. forces destroyed “three vehicles and equipment used to launch some of the rockets.”

The U.S. airstrikes targeted the Ayash Camp run by the Fatimiyoun group that includes Shiite fighters from Afghanistan, according to the opposition war monitor the Syrian Observatory for Human Rights, and news platform Deir Ezzor 24. The monitoring group reported that at least six Syrian and foreign militants were killed in the airstrikes, while Deir Ezzor 24 reported 10 deaths.

“We are closely monitoring the situation,” Gen. Michael “Erik” Kurilla, CENTCOM commander, said in a statement. “We have a total spectrum of capability to mitigate threats across the region, and we have every confidence in our ability to protect our troops and Coalition partners from attacks.”

US Airstrikes on Aug. 23

Colin Kahl, the undersecretary of defense for policy, told reporters that the U.S. airstrikes on Aug. 23, aimed at infrastructure facilities used by groups affiliated with Iran’s Islamic Revolutionary Guard Corps (IRGC), showed that “the United States will not hesitate to defend itself against Iranian and Iran-backed aggression when it occurs.”

“The strike was necessary to protect and defend U.S. personnel in Syria, which had been the targets of several recent attacks by Iran-backed militia groups, including the most recent ones on August 15,” he said at a press briefing.

In the Aug. 15 attack, drones allegedly launched by Iranian-backed militias targeted the al-Tanf Garrison, where U.S. troops are based in southeast Syria. CENTCOM described the assault as causing “zero casualties and no damage” at the time.

Kahl noted on Aug. 23 that the U.S. strikes reflect the commitment to “push back against Iran’s support for terrorism, militancy, and the threats that they engage in against our people in the region or elsewhere,” and “are not linked to wherever we end up on the nuclear deal,” referring to the 2015 Iran nuclear deal, also called the Joint Comprehensive Plan of Action (JCPOA).

“Whether the JCPOA is reborn or not, it actually has nothing to do with our willingness and resolve to defend ourselves. And I think the strike last night was a pretty clear communication to the Iranians, that these things are on different tracks,” he said.

He noted that the Biden administration has made it “pretty clear” that if Iran complies with the JCPOA, “that’s in our interest, because it pushes Iran further away from a nuclear weapons capability.”