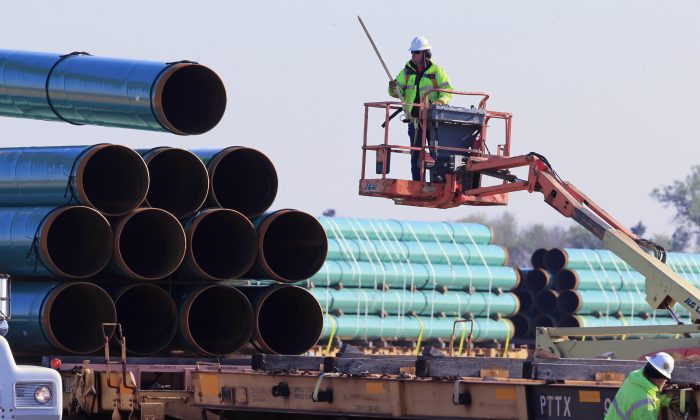 Workers unload pipes at a staging area in Worthing, S.D., on May 9, 2015, for the proposed 1,130-mile Dakota Access Pipeline that would stretch from the Bakken oil fields in North Dakota through South Dakota and Iowa to a hub in Illinois. North Dakota regulators are slated to decide the permit for the pipeline on Wednesday, Jan. 20, 2016. Regulators in South Dakota and Illinois already have approved permits for the project. (AP Photo/Nati Harnik)
Canada

Kinder Morgan’s Trans Mountain project would nearly triple pipeline capacity from 300,000 to 890,000 barrels of crude oil a day. It would carry oil from Alberta’s oil sands to the Vancouver area to be loaded on to barges and tankers for Asian and U.S. markets. The project would dramatically increase the number of oil tankers that ply Washington state waters.

“This project will harm the cultures of the U.S. tribes,” said Kristen Boyles, an Earthjustice attorney who spoke against the project Friday on behalf of the Swinomish, Tulalip, Suquamish and Lummi tribes. She made final arguments to Canada’s National Energy Board at a hearing in Burnaby, British Columbia, which was broadcast online.

Boyles told the three-member panel that project officials didn’t consult with the U.S. tribes and didn’t consider the impacts to the tribes. “This project is all risk and no reward,” she added.

The U.S. tribes are among the municipalities, environmental groups, First Nations and residents along the pipeline route who are intervenors in the case. Many have raised concerns about risk of pipeline leaks, increased vessel traffic and potential oil spills.

Last month, a lawyer for Kinder Morgan Inc. told the energy board that the $5.4 billion expansion can be done in a way that minimizes impact on the environment, addresses social impacts and provides many economic benefits.

“There is no doubt as to the need for this project and the benefits that will flow from it,” Kinder Morgan lawyer Shawn Denstedt said in December, according to an NEB transcript. “Trans Mountain has mature operations, maintenance systems, and emergency response plans already in place,” he added.

Kinder Morgan said in an email Friday that it was actively engaged with the Washington maritime community, which included representatives from government, industry, environment and tribes. “Our engagement is focused on providing information and gathering feedback related to marine traffic and emergency preparation and response,” it said.

The Washington Department of Ecology, also an intervenor in the case, is scheduled to give arguments next month.

In earlier written testimony, Ecology said it expects an additional 350 loaded oil tankers moving though state waters each year if the project is built. The state wants the project to ensure that vessels calling at the Vancouver terminal follow standards that are as protective as those in Washington.

“Any spill is immediately damaging, even the smallest of spill,” Linda Pilkey-Jarvis, manager of Washington’s spill preparedness, said in an interview.

Twists and Turns of Pipeline Politics

Ecology officials have said the project should require all vessels and barges to have tug escorts. It should also be required to help pay for and develop a response plan to address the risks of vessels carrying diluted bitumen, as well as show evidence it can pay for response and damage costs if a spill happens.

Trans Mountain has agreed to make it a requirement that tankers accepted at the Vancouver terminal have enhanced tug escort from the terminal to the west entrance of the Strait of Juan de Fuca, according to Pilkey-Jarvis.

Northwest tribes say increased vessel traffic poses a safety risk to fishermen and could have disastrous impacts on tribal fishing areas that are protected by its treaty with the U.S. They say the fisheries are important not only to jobs and livelihood but that it plays a major part of their self-identity.

“We are speaking directly to the Canadian regulators to highlight the risks of this pipeline to our lives, our culture, and the priceless waters of the Salish Sea,” Swinomish Chairman Brian Cladoosby said in a prepared statement.

Environmental groups also worry about the environmental impacts to the small endangered population of orcas that spend time in Washington state and Canada waters.

The energy board is scheduled to make its recommendations on the pipeline expansion by May 20.