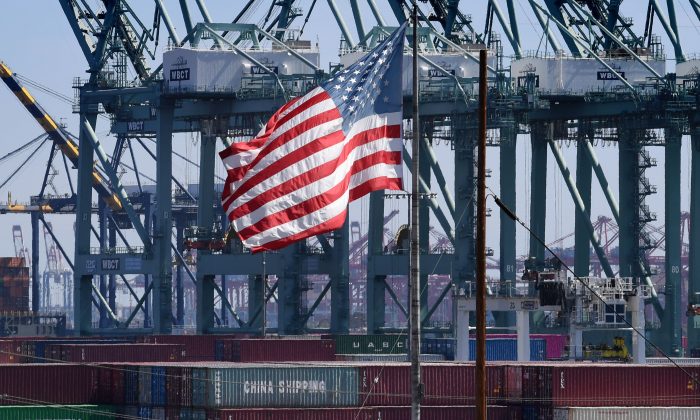 The U.S. flag flies over Chinese shipping containers that were unloaded at the Port of Long Beach, in Los Angeles County on Sept. 29, 2018. (Mark Ralston/AFP/Getty Images)
By Tom Ozimek

The United States’ November 2019 trade deficit fell to its lowest point in more than three years, suggesting the Trump administration’s agenda to recalibrate international flows of goods and services is having an impact.

“As of this morning’s figures, the total U.S. trade deficit is heading for its first year-over-year decline since 2013, when U.S. growth was a good deal lower than what’s likely for this year,” trade expert Alan Tonelson told The Epoch Times.

The goods trade deficit with China, the focus of the White House’s “America First” agenda, decreased 15.7 percent to $26.4 billion, with imports decreasing 9.2 percent and exports increasing by 13.7 percent.

Tonelson argued that the trade figures, which pertain to November flows of goods and services, “show that Trump’s China hard line is working.” He urged the administration to maintain its pressure in the trade dispute and take further steps to decouple the two countries’ economies.

“Decoupling the U.S. economy from China’s is crucial for U.S. prosperity because the pre-Trump policy of expanding trade and commerce with the People’s Republic has been such a net loser for the American economy,” Tonelson said.

“And it’s crucial for U.S. national security because the pre-Trump policies recklessly transferred so much in the way of resources and defense-related technology to an increasingly hostile and aggressive China.”

The Commerce Department figures also show that the goods trade gap with the European Union fell 20.2 percent to $13.1 billion.

Though Washington and Beijing in December hammered out a “phase one” trade deal, uncertainty remains about the details of the agreement. Trump wrote on Twitter on Dec. 31, 2019, that the partial deal would be signed on Jan. 15 at the White House.

While the 18-month-long U.S.–China trade war is widely reported as having dampened business investment, the new Commerce Department figures show a slight rise in capital expenditures.

“Thanks to the new November final numbers, U.S. core capex turned positive again year-over-year,” Tonelson said. “The increase is just 0.4 percent, but the monthly improvement was the second straight and the eighth this year, despite all the trade war uncertainty caterwauling.”

U.S. financial markets were little moved by the decline in the trade deficit, which was flagged in an advance report published on Dec. 30, 2019.

Trump has made reducing the trade deficit a major priority of his administration.

Economists expect trade will add at least 1.5 percentage points to GDP growth in the fourth quarter after being a drag for two straight quarters.

The Atlanta Federal Reserve is forecasting GDP increasing at a 2.3 percent annualized rate in the fourth quarter. The economy grew at a 2.1 percent pace in the third quarter.