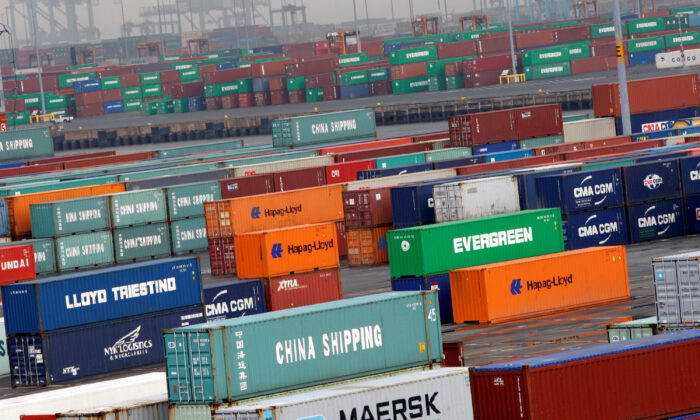 US Trade Deficit Falls to 1.5-Year Low Amid Fewer Imports from China

America’s trade deficit fell by 7.6 percent in October to a 16-month low, driven in part by lower imports from China amid the ongoing trade dispute.

The deficit in the nation’s October trade bill dropped to $47.2 billion from a revised $51.1 billion the previous month, the Bureau of Economic Analysis said Thursday. The drop was the second straight monthly decline in the trade account as both imports and exports of goods fell.

The smaller trade gap could boost gross domestic product in the fourth quarter.

Imports of Chinese goods fell by $1.8 billion to $35.3 billion from September to October, according to seasonally-adjusted, census figures.

Products that the United States imported fewer of in October versus September include pharmaceuticals, cell phones, clothes, toys, and television sets.

In the same period, American exports to China fell from $9 billion to $7.5 billion.

Total October exports from the United States amounted to $207.1 billion, which is a month-to-month drop of 0.2 percent, or $0.4 billion.

The decreases in imports and exports come as the trade conflict with China reaches its seventeenth month.

Washington and Beijing have yet to ink a so-called “phase one” agreement announced in October, which had raised hopes of a de-escalation of the trade conflict between the two nations.

The world’s two largest economies said in October they had reached a partial trade agreement, in principle, on intellectual property, financial services, and agriculture.

President Donald Trump and Chinese leader Xi Jinping had planned to meet and sign the preliminary trade deal at an Asia-Pacific leaders’ summit in Chile in mid-November, but the summit was canceled.

Speaking ahead of a meeting with NATO leaders in London, Trump said a trade agreement with China might have to wait until after the election in November 2020.

U.S. stocks took a dive on Tuesday after Trump suggested a trade deal might have to wait.

The Dow Jones Industrial Average fell more than 450 points in morning trading, recording its biggest fall in two months. The S&P 500 and the Nasdaq Composite also lost more than 1 percent.

On Wednesday, Trump said trade talks with China were going “very well,” sounding a more optimistic note than at the NATO summit.

Investors have been hoping that the United States and China can avert an escalation of their trade tensions, which have strained investor confidence.

Some two dozen top economists told Bankrate in a Q4 poll that there was a 35 percent chance of a recession in 2020, compared to a 41 percent chance expressed in a similar Q3 survey.

The findings of Bankrate’s Fourth-Quarter Economic Indicator survey show that the experts, mostly chief economists and senior executives of financial institutions, are currently more optimistic about next year’s economic prospects than a similar cohort of respondents was last quarter.

In a similar echo of greater confidence in the fourth quarter than in the third, key details of Monday’s Institute for Supply Management (ISM) report were upbeat, including new orders and services industry employment.

“Comments from the panel were consistent with the previous month, with sentiment improving compared to October,” Timothy Fiore, Chair of the ISM Business Survey Committee, said in a release.

While the economy grew at a 2.1 percent pace in the third quarter, the ISM report noted an annualized GDP growth rate of 1.5 percent.

“The past relationship between the PMI [Purchasing Managers’ Index] and the overall economy indicates that the PMI for November (48.1 percent) corresponds to a 1.5-percent increase in real gross domestic product (GDP) on an annualized basis,” Fiore said.

Growth estimates for the fourth quarter are between a 1.3 percent and 1.9 percent annualized rate.

Tariffs on Brazil and Argentina

Meanwhile, Trump announced on Monday renewed steel and aluminum tariffs on Brazil and Argentina, a measure aimed to defend U.S. producers and workers.

The recent devaluation of the Brazilian and Argentine currencies prompted him to take action, the president said.

Trump has been implementing or threatening tariffs against a number of countries in an attempt he describes as rebalancing an unfair global trade imbalance.