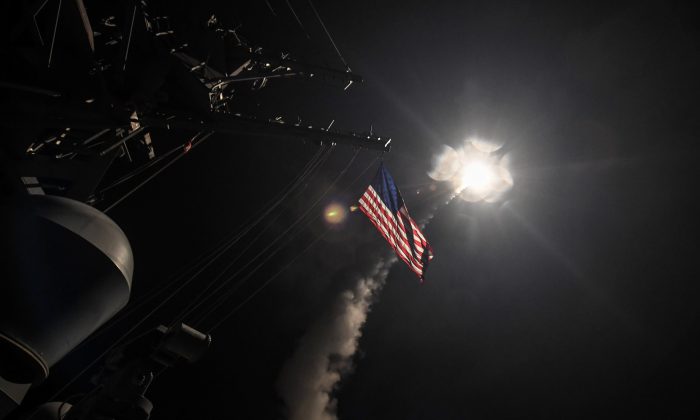 Russia's S-400 defense system is advertised as having a range of up to 250 miles, but experts are questioning these claims after strike on Syria airbase
By Paul Huang

A recent U.S. missile strike on a Syrian airbase might have exposed a crucial weakness in Russia’s state-of-the-art S-400 defense system, according to experts.

Under the orders of President Donald Trump on April 7, two U.S. destroyers located in the Mediterranean Sea launched 59 Tomahawk cruise missiles targeting Syria’s Shayrat airbase. The strike was in response to a chemical weapons attack by Syria’s Assad regime, which left more than 80 dead in a rebel-held area.

The U.S. Tomahawk strike destroyed over a dozen Syrian bomber jets and hangers. Yet during the event, according to multiple sources, Syrian and Russian air defense systems remained silent.

The S-400, a system designed to intercept missiles and other aircraft, is Russia’s latest and most advanced air defense system. The Kremlin announced in November 2015 it was deploying S-400 in two locations in Syria—one in Latakia, where Russia has an air base, and another in Tartus to protect a Russian naval base of crucial strategic importance.

The April 7 strike may have been the first engagement between Russia’s S-400 system and U.S. Tomahawk missiles, which have been in service since 1983. Prior to April 7, Russian state media boasted that S-400 could repel attacks from aircraft, drones, and cruise missiles, including U.S. Tomahawks.

S-400, which evolved from the S-300 missile system, has been widely advertised as capable of repelling attacks within a range of nearly 250 miles. In contrast, the publicized range of the comparable U.S. system, the Patriot Air and Missile Defense System manufactured by Raytheon, is conservatively put at no more than 100 miles.

Prior to the April 7 strike, Russian officials and commentators claimed that the range of S-400 would be enough to cover the whole territory of Syria.

This advertised range is likely unrealistic, as experts have pointed out that air defense systems like S-400 can only achieve their maximum ranges when engaging targets at high altitudes.

Fu S. Mei, a New York-based expert in military and security issues, says that it is difficult for ground-based anti-air systems to detect and engage low-flying cruise missiles, like the Tomahawks.

By flying at very low altitudes—about 50 to 100 feet high—cruise missiles like Tomahawks can evade detection by the radars of even the most advanced anti-air systems, until they appear on the horizon.

“All this talk that we have secured the whole of Syrian airspace is artistic whistling,” said Pavel Felgenhauer, a Moscow-based military analyst, as quoted by Radio Free Europe.

“You can more or less defend a perimeter of about 40 kilometers [25 miles],” he said. The Mediterranean port cities of Latakia and Tartus are both more than 60 miles from Shayrat air base, which is located inland.

Even with a range of as little as 25 miles, the two S-400 systems in Latakia and Tartus should have been capable of covering most of the Syrian coast. According to U.S. official accounts, however, almost all of the Tomahawks fired from the two U.S. destroyers in the Mediterranean Sea made their way to the Shayrat air base without interception.

While further details on the flight path of the missiles has not been revealed thus far, based on maps of the region, the Tomahawks might have flown through the northern airspace of Lebanon to bypass the detection and engagement radius of the S-400 systems. Such a detour is easily achievable, given that all variants of the Tomahawk missiles have ranges of more than 700 miles.

“The success or failure of a cruise missile strike is determined in large part by the effectiveness of intelligence. … By knowing in advance the enemy’s deployments of anti-air missiles and defenses, one can predictably plan an attack path in a way as to avoid detection and interception,” said Mei.

Outside of Russia, China is said to be in the process of acquiring the S-400 system. China has already acquired a significant number of the less advanced S-300 systems and has deployed several battalions in the Taiwan Strait region.

Russian company officials and commentators have long boasted that the S-400’s supposedly long range will help China “secure control over the airspace of neighboring countries and territories, including Taiwan and the Senkaku Islands,” according to Russia’s Sputnik news. The April 7 strike, however, is likely to cast doubt on such claims.