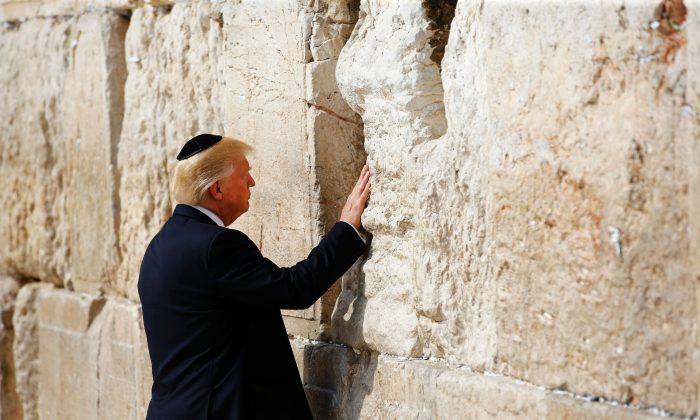 President Donald Trump prays at the Western wall in Jerusalem on May 22, 2017. (RONEN ZVULUN/AFP/Getty Images)
Politics

US to Withdraw From UNESCO Over Its ‘Anti-Israel Bias’

The U.S. State Department alerted UNESCO Director-General Irina Bokova on Oct. 12 of its decision to withdraw from the organization, requesting to remain only as an observer. Its withdrawal will take effect on Dec. 31, 2018.

“This decision was not taken lightly, and reflects U.S. concerns with mounting arrears at UNESCO, the need for fundamental reform in the organization, and continuing anti-Israel bias at UNESCO,” said a statement from the State Department.

According to a profile on the Russian UNESCO website, Bokova was also educated at the Moscow State Institute of International Relations during the Cold War and graduated in 1976. It says her father was “one of the leaders of the Bulgarian Communist Party.”

The Bulgarian Communist Party killed an estimated 222,000 people, according to the Victims of Communism Memorial Foundation. It also tortured dissidents and brutally persecuted religious groups, including Christians.

Jewish leaders have repeatedly criticized decisions made by UNESCO, which they believe have amounted to attacks on their religious heritage. This included resolutions passed by the organization that designated major Jewish landmarks—including the Western Wall and the Tomb of the Patriarchs in Hebron—as belonging to Palestine.

“Who is buried there? Abraham, Isaac, Jacob, Sarah, Rebecca, and Leah—our patriarchs and matriarchs,” Netanyahu said in a statement, referring to the move as “another delusional UNESCO resolution.”

State Department spokesperson Heather Nauert gave more details on the U.S. decision during an Oct. 12 press briefing, noting that under U.S. law, the United States is forbidden from funding any U.N. organizations that accept the Palestinians as a member state.

The United States designated the Palestine Liberation Organization (PLO) as a terrorist organization in 1987. Under its former chairman, Yasser Arafat, the PLO and its affiliates carried out numerous terrorist attacks, including the massacre of 11 Israeli athletes and one German police officer during the 1972 Munich Olympics, by PLO-affiliate group Black September. In 1994, under the Oslo Accords, the Palestinian National Authority (PA) became the recognized governing organization of the Palestinians. To this day, the PA gives monetary rewards to the families of individuals who commit acts of terror against Israelis.

Nauert noted that the policy of not funding U.N. organizations that accept the Palestinians predates the Trump administration. “We were in arrears to the tune of $550 million or so,” Nauert said. “The question is, do we want to pay that money, and do we want to pay more money going forward, when there is actually a law that says the U.N. entity that accepts Palestinians as a member state can no longer receive U.S. funding?”

The second part of the decision to withdraw from UNESCO, Nauert said, is that “we’d like to see overall U.N. reform.” With U.N. entities such as UNESCO, “we’d like to see the politics kept out of it, and we see with this anti-Israel bias that’s long documented on the part of UNESCO that that needs to come to an end.”

Following the decision, Israel also announced it would withdraw from the organization. U.S. Ambassador to the United Nations Nikki Haley supported the decision to withdraw and gave a warning. “The United States will continue to evaluate all agencies within the United Nations system through the same lens,” said the U.S. Mission to the U.N., in a press release.