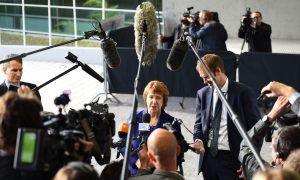 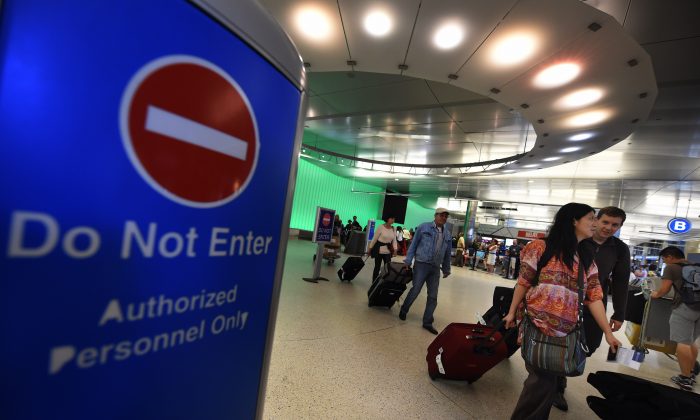 Passengers arrive at the Los Angeles International Airport as the US announced increased passenger screenings against the Ebola Virus on Oct. 9, 2014. (Mark Ralston/AFP/Getty Images)
Ebola

US to Track Everyone Coming From Ebola Nations

WASHINGTON—Stepping up their vigilance against Ebola, federal authorities said Wednesday that everyone traveling into the U.S. from Ebola-stricken nations will be monitored for symptoms for 21 days. That includes returning American aid workers, federal health employees and journalists, as well as West African travelers.

The program will start Monday in six states that represent 70 percent of people arriving from Liberia, Sierra Leone and Guinea, said the Centers for Disease Control and Prevention.

CDC Director Tom Frieden said monitoring would extend to other states in coming days and reach “every person coming back to the country for the 21 days they are at risk for Ebola.” He said it would continue until the outbreak in West Africa is controlled.

“We have to keep our guard up,” Frieden told reporters on a conference call.

Local and state officials will perform the daily monitoring, which may consist of keeping up with people by phone or visits. The first states are New York, Pennsylvania, Maryland, Virginia, New Jersey and Georgia.

Individuals arriving from West Africa will receive “care kits” that include thermometers, detailed information on how take their temperature twice a day, and logs for recording the information. Temperatures must be reported to health officials at least once per day, he said.

Frieden said the message to travelers is: “If you become sick, get care quickly because that could save your life and protect your family.”

The kits also will include information on whom to call if symptoms occur and a card the traveler can present to health care providers if they seek care.

CDC already was telling its own employees and other health professionals working in the outbreak zone to monitor their temperature for 21 days upon return, so Wednesday’s announcement adds another step to their ongoing fever watch.

The new program comes after authorities announced Wednesday plans to funnel all visitors from the three nations through five airports where fever checks and other Ebola screening measures have been put in place.

An American video journalist who has recovered from Ebola left the hospital Wednesday and headed home to Providence, Rhode Island.

“Today is a joyful day,” Ashoka Mukpo said in a statement released by the Nebraska Medical Center in Omaha. The hospital said testing found him free of the virus now.

“I feel profoundly blessed to be alive, and in the same breath aware of the global inequalities that allowed me to be flown to an American hospital when so many Liberians die alone with minimal care,” said Mukpo, who arrived at the Nebraska hospital Oct. 6.

The virus has killed more than 4,500 people in West Africa, nearly all in Liberia, Sierra Leone and Guinea. Mukpo caught it while working in Liberia as a freelance cameraman for NBC and other media outlets.

Two American nurses remain hospitalized after catching the virus from a Liberian man who traveled to the U.S. before exhibiting symptoms and dying at a Dallas hospital. Because of their cases, the CDC issued more stringent safety guidelines this week and is working with states to spread them to health care workers across the country.

Debra Berry, the mother of Dallas nurse Amber Vinson, said Tuesday her daughter is “doing OK, just trying to get stronger” while being treated at Emory University Hospital in Atlanta.

Fellow Dallas nurse Nina Pham’s condition has been upgraded from fair to good at the National Institutes of Health outside Washington.

Under heavy criticism for the government’s handling of the first Ebola case diagnosed within the U.S., Obama reached for help last week from Klain, a veteran political operator and former chief of staff to Vice President Joe Biden. Klain will coordinate the array of federal agencies dealing with Ebola in the U.S. and helping to tackle the crisis in West Africa.

The Obama administration has resisted increasing pressure to ban travel from the three countries at the center of the Ebola outbreak. Obama and federal health authorities say that could make the situation worse, by making it harder for foreign doctors and aid workers to get help to nations that desperately need it and can’t stop the outbreak on their own.

In addition to Mukpo, three American doctors and an aide worker, all infected in Liberia or Sierra Leone, have been treated at the Nebraska Medical Center or Emory University Hospital in Atlanta, and have recovered.

From The Associated Press. AP writers Mike Stobbe in New York, Emily Schmall in Dallas and Nancy Benac in Washington contributed to this report.