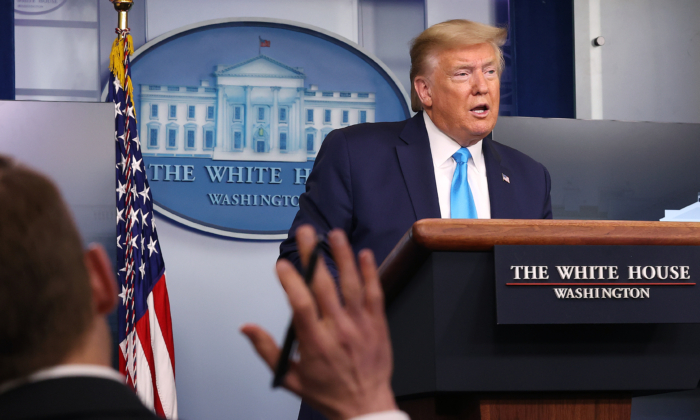 President Donald Trump speaks to reporters following a meeting of the coronavirus task force in the Brady Press Briefing Room at the White House in Washington on April 7, 2020. (Chip Somodevilla/Getty Images)
AMERICA

US to Place Hold on Funding to World Health Organization

The United States plans to place a hold on funding for the World Health Organization (WHO), President Donald Trump announced on Tuesday.

The president said the WHO is “too China-centric” and criticized the organization for opposing his early decision to place a ban on travel from China aimed at preventing the spread of the CCP (Chinese Communist Party) virus, to the United States.

The president also claimed that the WHO may have known about the threat from the CCP virus but did not inform the world on time.

Trump later added that the WHO “called every aspect” of the CCP virus pandemic wrong.

Trump hinted at cutting funding to the WHO in a Twitter post earlier in the day, pointing out that the organization is closely aligned with China despite the United States contributing the largest portion of WHO’s funding. U.S. contributions to the United Nations’ organization last year exceeded $400 million, according to the State Department.

“They seem to err always on the side of China. And we fund it,” Trump said.

The WHO has repeatedly praised China’s leaders despite experts and unearthed evidence showing how officials manipulated the true situation in the country where the CCP virus emerged last year.

American lawmakers have called on Dr. Tedros Adhanom Ghebreyesus, director-general of the WHO, to resign amid accusations of helping the Chinese Communist Party cover up the outbreak and probing whether WHO is complicit in the manipulation.

“We know communist China is lying about how many cases and deaths they have, what they knew and when they knew it—and the WHO never bothered to investigate further. Their inaction cost lives,” Sen. Rick Scott (R-Fla.) said in a statement.

“We could cut funding or we could tie future funding to certain changes,” Scott added to the Daily Signal. “It is supposed to be the World Health Organization, world health, but it panders to China.”

Reporters have regularly pressed WHO officials on China’s role in the CCP virus spreading around the world but each time the officials have deflected answering directly, often saying things similar to statements from top Chinese officials. The WHO has also faced questions on its dealings with Taiwan.

WHO officials said during a briefing after Trump’s remarks that funding should not be cut.

“We are still in the acute phase of a pandemic so now is not the time to cut back on funding,” Dr. Hans Kluge, WHO Regional Director for Europe, told a virtual briefing in response to a question about Trump’s remarks.

Dr. Bruce Aylward, senior adviser to the WHO director-general, also defended the U.N. agency’s relationship with China, saying its work with Beijing authorities was important to understand the outbreak which began in Wuhan.

“It was absolutely critical in the early part of this outbreak to have full access to everything possible, to get on the ground and work with the Chinese to understand this,” he told reporters.

“This is what we did with every other hard-hit country like Spain and had nothing to do with China specifically.”