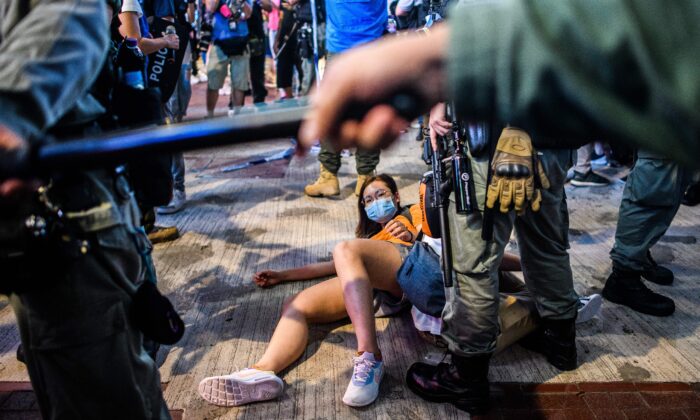 The visa restrictions will affect current and former CCP officials responsible for undermining Hong Kong’s autonomy, human rights, and freedoms, U.S. Secretary of State Mike Pompeo said in a statement. The officials’ family members may also be subject to the restrictions.

Individuals who meet these criteria may have their U.S. visa applications refused, a state department spokesperson told The Epoch Times. They noted that the measure was enacted under section 212(a)(3)(C) of the Immigration and Nationality Act.

Despite sweeping international condemnation and pressure, Beijing has moved ahead with imposing a national security law for Hong Kong, which includes the establishment of a Beijing security agency in the territory.

Critics fear the law will allow the CCP to crack down on those critical of the regime. They say the move marks the end of Hong Kong’s autonomy, guaranteed by the regime under the framework known as “one country, two systems” when the city transferred from British to Chinese rule in 1997. This pledge was codified in the 1984 Sino-British Joint Declaration, the treaty governing the handover.

In response to Beijing’s actions, Trump last month announced that the administration would begin the process of eliminating Hong Kong’s special privileges spanning areas from trade to immigration because the city was no longer “sufficiently autonomous” from China to justify preferential treatment. He also said Washington would sanction Chinese officials involved in stripping the city’s autonomy.

“Hong Kong’s high degree of autonomy and the full implementation of the Sino-British Joint Declaration, as well as respect for human rights, are of fundamental importance,” Pompeo said. “The United States will continue to review its authorities to respond to these concerns.”

The Senate yesterday passed a bill that would impose mandatory sanctions on individuals or companies that back efforts by the regime to restrict Hong Kong’s autonomy. The measure also includes secondary sanctions on banks that do business with anyone found to be backing any crackdown on the territory’s autonomy, potentially cutting them off from American counterparts and limiting access to U.S. dollar transactions.

Pompeo last week had his first face-to-face meeting in months with China’s top diplomat, Yang Jiechi, during which the latter said Washington needed to respect Beijing’s positions on key issues and halt its interference in matters such as Hong Kong, while working to repair relations. Pompeo later said he went into the meeting to share that the CCP “is behaving in ways that fundamentally put the American people’s security at risk.”

“What we need to see from them is a change in behavior,” Pompeo said during a June 23 radio interview on The Hugh Hewitt Show where he recounted details of the meeting. “When I left that day, I did not leave optimistic that the Chinese Communist Party was prepared to give us any notice that there were changes that were going to be made,” he said, noting that a few days later Beijing moved ahead with plans to tighten its grip on Hong Kong with the new national security law.