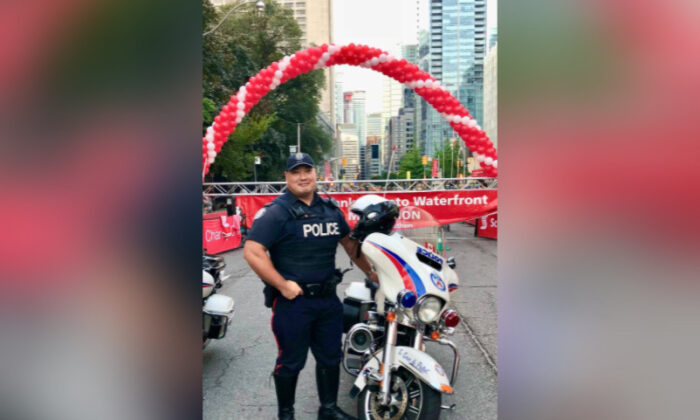 People as far away as Florida are showing support for the family of Const. Andrew Hong. The officer with the Toronto Police Service died on Monday Sept. 12 after being killed during a shooting rampage in Mississauga that left another person dead and wounded three others.

The tragedy prompted 13-year-old Zechariah Cartledge of Florida to do a one-mile run in honour of Const. Hong, while carrying a Canadian flag with a blue line through it to show support for police. Cartledge is with the organization Running4Heroes, based in Winter Springs, Florida, and runs to honour fallen police officers.

“We pray all will be healed of the loss you are going through,” said Cartledge in a video the group posted to Facebook on Wednesday evening. The run included an escort of local police, and Canada’s national anthem played on bagpipes. “We hope this run shows you how much of a hero he was,” added Cartledge. “We hope the run also shows you that even in the United States of America we are going to be supporting you.”

The tribute also included a prayer, and 22 seconds of silence, one for every year of Const. Hong’s service.

Mississauga city councillor Pat Saito tweeted about the tribute, and in a telephone interview praised the gesture.

“It touched me so much that this kid, he’s 13 years old, and he’s been doing this since 2019, when he was ten years old,” she told The Epoch Times. “I just thought it was so wonderful that he did it for someone here.”

“We wanted to do our part to show your country that your first responders are viewed as heroes even down here,” Cartledge, who is CEO of the organization and Zechariah’s father, told The Epoch Times.

He added that the flag used during the run, and a hand-written note from Zechariah, will be sent to the family of Const. Hong through the Toronto Police Association.

While the tribute has touched people, it’s also a grim reminder of the sacrifices being made by many officers across North America. Cartledge says his son averages over 150 runs per year.

Const. Hong, who was 48, is survived by his wife, two children, and his parents

For Saito, the troubling aftermath of the shooting remains.

“It was something we’ve seen in the news, in Nova Scotia, in Saskatchewan, and other places, these killing sprees, but when it hits close to home, it just sent the entire community reeling with shock.”

And now, she says, what she is hearing from people is anger.

“Right now people are angry,” Saito said. “They are really angry that this person who had a long record of violence and arrests and gun violence, robberies, and everything else was able to get a gun and go in and point blank shoot a police officer,” she said.

The shooter was killed after an exchange of gunfire with police, and has been identified as 40-year-old Sean Petrie, of no fixed address.

Saito says many are asking how it could have been prevented, adding law enforcement agencies are doing all they can.

“They are illegal guns, it was an illegal gun,” she said. “I guess there’s an underground market that you can get drugs, you can get guns…our Police Service [Peel Regional Police] is confiscating guns all the time,” she said.

But in spite of all the work by law enforcement, Saito added, the problem does not seem to be going away.

“They’re all facing the same thing, and trying to…get [illegal guns] off the streets,” she said.

For their part, Cartledge says besides tribute runs, their organization also raises funds for injured first responders, and the families of those killed. He said since 2019 the organization has given away over US$600,000, although so far donations have all been distributed in the United States

“[Zechariah] wanted to do more…to show his appreciation for those that make the ultimate sacrifice,” Cartledge said. “He started this in 2019 as his way of showing his appreciation … and it never stopped.”