US Targets Chinese Political Interference Ahead of 2020 Elections 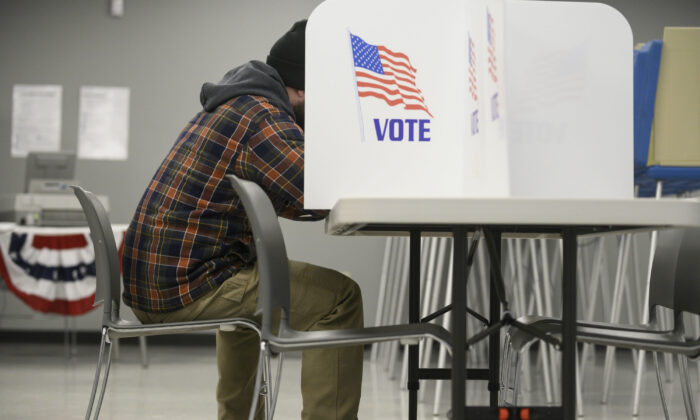 A voter fills out a registration form at the Minneapolis Early Vote Center on Jan. 17, 2020, in Minneapolis, Minnesota. (Stephen Maturen/Getty Images)
By Cathy He

As the United States heads toward election season later this year, the threat of Russian interference isn’t the only concern that looms large.

With federal authorities on high alert after the much-publicized Russian disinformation campaign during the 2016 elections, they have also expanded their dragnet to target other malign actors, including the Chinese regime.

“Russia, China, Iran, and other foreign malicious actors all will seek to interfere in the voting process or influence voter perceptions,” they said in a joint statement in November last year.

While Russian interference has largely taken place in the cyber arena, such as social media campaigns and email hacking, Chinese activities take on a different color.

U.S. Assistant Attorney General for National Security John Demers said at a homeland security event in Washington last week that “on the Chinese side … we haven’t seen that kind of activity [email hacking].

“But we are worried about what I’d call more foreign influence activities,” he said.

Unlike Russian objectives focused on inflicting immediate harm to U.S. democratic institutions, such as by sowing chaos and discord, Beijing “has very specific policy objectives that they are after,” Demers said.

For instance, “Stop talking about Hong Kong. Stop talking about the Uyghurs. Stop interfering with our desire one day to control Taiwan,” he said. China considers Taiwan part of its territory despite it being a self-ruled democracy with its own currency and military.

Jeff Nyquist, an author and researcher of Chinese and Russian strategy, however, told The Epoch Times that the Chinese regime’s ultimate goal is far more expansive.

“The Chinese objective is to embed themselves … inside the West. And it becomes so powerful in their position there, that nobody can say no to them when they want something,” he said.

Demers cited public examples of Beijing using its economic clout to pressure U.S. companies or people to take stances that don’t offend the regime. This includes the National Basketball Association (NBA) controversy last year over a tweet by Houston Rockets general manager Daryl Morey in support of protesters in Hong Kong, which later led to almost all Chinese sponsors cutting ties with the NBA. For months, Hongkongers have expressed anger at Beijing’s increasing encroachment on the city’s autonomy.

“That [pressure] can also be done much more quietly,” Demers noted.

“Folks who have business in China, or in areas [industries] that are controlled by China, are vulnerable to economic pressure. And those are the same people who may be involved in a variety of ways in election campaigns here in the U.S.”

Influencing elections is about “influencing the money that goes in behind the election,” Nyquist said.

This, he said, was exemplified during the 2016 U.S. presidential race when almost no candidate—Democratic or Republican—with the exception of Donald Trump, spoke about getting tough on Beijing over its unfair trade practices. Trump was in a position to take such a stance because, unlike his rivals, he partially self-funded his presidential campaign, Nyquist noted.

He said the Chinese regime’s modus operandi can be gleaned from the findings of a secret intelligence report prepared in 1997 by analysts in Canada’s law enforcement and intelligence agencies, known as “Project Sidewinder.”

That study, which was leaked to media and ultimately shelved by the Canadian Security Intelligence Service, found that the Chinese regime sought to gain control of key industries in the country, particularly real estate, through organized crime networks, and, in turn, leverage that economic clout to influence the political system.

“You have natural systems of lobbyists within countries [such as] Canada [and] … the United States,” Nyquist said.

“If you can become part of that lobby, gain a voice within that lobby, and send agents of influence into it, you can then use that powerful lobby” to influence politicians and political parties, he said.

This influence extends to having a say on which candidates are selected to run for election, he said.

Two decades after the Sidewinder report, the issue of Chinese political influence burst into the spotlight in another commonwealth country: Australia. Following news reports in 2017 of wealthy Chinese businessmen with alleged links to the regime donating millions of dollars to Australia’s two major political parties, the country enacted anti-foreign interference laws—similar to those in the United States—barring foreign donations.

“The ambition of Chinese activity, in terms of the breadth, depth of investment of financial resources, and intensity, requires far greater scrutiny than it has been getting, because China is intervening more resourcefully and forcefully across a wider range of sectors than Russia,” the report found.

Beijing’s approach focuses on cultivating relationships with individuals, and this is often combined with espionage operations.

“It is person-to-person relationships that carry the weight of Chinese information operations. Working on these personal ties, the Chinese authorities focus on facilitating meetings and contacts that may or may not result in opportunities to influence foreign targets,” the report stated.

In some instances, the regime has also “used private citizens and/or companies to exploit loopholes in U.S. regulations that prohibit direct foreign contributions to elections,” it said.

In response to Chinese influence attempts across society, the report advocates a policy of “constructive vigilance.”

“Sunshine is the best disinfectant against any manipulation of American entities by outside actors and we should shine as much light as possible on Chinese influence seeking over organizations and individuals,” it said.