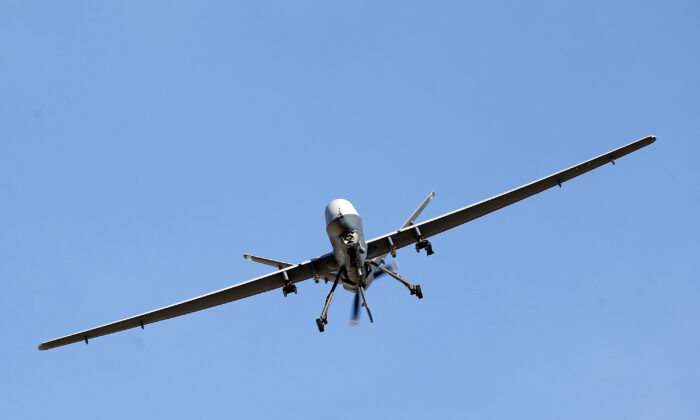 The United States and the Somalian government coordinated to launch two air strikes against al-Shabaab, an al-Qaeda affiliate, the U.S. military said on Saturday.

The air strikes targeted terrorists and a compound in the vicinity of Jilib on Feb. 6. Initial assessments released on Feb. 8 concluded that an al-Shabaab facility was severely degraded and two al-Shabaab terrorists were wounded.

“We currently assess no civilians were injured or killed as a result of these airstrikes,” U.S. Africa Command said.

“The attack at Manda Bay demonstrates that al-Shabaab remains a dangerous and capable enemy,” U.S. Army Gen. Stephen Townsend, U.S. Africa Command commander, said in a statement after the attack. “They are a menace to the people of East Africa and U.S. national interests there and their sights are set on eventually attacking the U.S. homeland. It is important that we continue to pursue al-Shabaab and prevent their vision from becoming a reality.”

The United States, in coordination with the Somalian government, conducted an airstrike targeting al-Shabaab in Qunyo Barrow on Jan. 16, the first strike since Dec. 31. That strike killed two terrorists.

Another strike was carried out three days later near Bangeeni, killing three militants. And another strike carried out in the vicinity of Jilib on Jan. 27 killed one terrorist, according to U.S. Africa Command.

Another strike against al-Shabaab in the same area took place on Feb. 2, killing one terrorist. And, in coordination with the Somalian government, a Feb. 4 strike by the United States in the Beer Xaani area killed one terrorist.

William Gayler, a U.S. Army major general and director of operations for the command, said earlier this month that “removal of even one terrorist makes the region and the U.S. safer.”

The command has said that no civilians were injured or killed as a result of the strikes and said they’re complying with the principles of the Law of Armed Conflict to protect civilians.

Some locals have said that some civilians were injured or killed by some of the recent strikes. Mohamed Osman Abdi, a Somalian journalist, said that one strike in Jilib killed his brother-in-law’s daughter and injured others.

According to a 2019 Amnesty International report 14 civilians were killed and eight others have been injured in U.S. strikes in Somalia. The U.S. military said in April 2019 that a woman and child were killed by a drone strike in Somalia in April 2018 after initially stating the allegations by Amnesty weren’t substantiated.

The strikes came as Somalia forces are scheduled to take the lead on security in the country in 2020. The United Nations’ African Union Mission in Somalia currently leads the security after a mandate extended their deployment but reduced personnel by 1,000 last year.