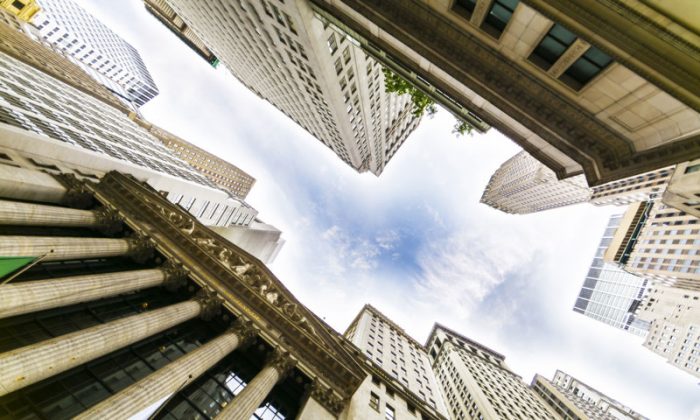 NEW YORK—Wall Street had its best day of the year.

The U.S. stock market surged on Wednesday, erasing a steep loss from the day before. Investors were reacting to minutes from the Federal Reserve’s latest policy meeting, which showed that the central bank wants to keep interest rates extremely low for the time being.

“There’s a lot of pressure on the Fed right now, so this was a big vote of confidence from investors,” said J.J. Kinahan, chief strategist at TD Ameritrade.

The jump was the latest whipsaw day for the stock market. Only the day before, the Dow plunged 273 points on fears that the global economy was slowing. Wednesday’s gains only made up for what investors lost on Tuesday.

Volatility has picked up sharply in U.S. stocks in recent days. Dow has had moves of 200 points or more five times in the last 10 days. There have only been 10 other days this year when the index has made moves of that magnitude.

Market watchers have been warning for some time now that the market was due to have more volatility, particularly with economic weakness developing in Europe and Asia and with the Federal Reserve on track to end a bond-buying stimulus program later this month. Analysts say investors should expect more big moves in coming weeks.

“I don’t think this is going to end until the Fed’s meeting in October,” said James Liu, a global market strategist at JPMorgan Funds. “The market is in a tug-of-war between the slowdown in international economies and the strong economic numbers here in the U.S.”

The stock market moved between gains and losses for most of the day, then surge in the last two hours of trading after the Fed released its minutes at 2:00 p.m. Eastern time.

Investors were encouraged by the language in the minutes of the Fed’s latest meeting, which signaled the central bank would only raise interest rates when measures of the economy’s health and inflation signaled the time was right, instead of using a specific date or period.

Investors like low interest rates since they keep the cost of borrowing inexpensive for businesses and individuals, encouraging spending and investment. The Fed also sees inflation remaining low for the next few years, another positive for most investors.

The U.S. economy has been a bright spot in an otherwise darkening picture for the global economy. The IMF cut its outlook for this year and next for global growth, citing weakness in Japan, Latin America and Europe. The IMF expects the global economy will grow 3.3 percent this year, slightly below what it forecast in July. Europe, in particular, has been weak. Germany said Tuesday that its industrial output fell 4 percent in August, far more than expected.

In contrast, reports like September jobs survey show the U.S. economy continuing to expand. Investors have become concerned that Europe’s weakness will eventually drag on the U.S. too.

“I think the U.S. economy could be protected from Europe for a quarter or two, but will start hurting us here eventually,” Kinahan said.

Investors now turn their attention to U.S. companies, who will start reporting their quarterly results en masse in the coming weeks.

Alcoa, the aluminum giant, reported its results after Wednesday’s closing bell, which came in much better than expectations. The Pittsburgh, Pa.-based company reported an adjusted third quarter profit of 31 cents a share, much more than the 21 cents analysts were looking for. Alcoa rose 32 cents, or 2 percent, to $16.39 in after-market trading.

In other company news, Sears Holdings, the parent company of Sears and K-mart, dropped $1.45, or 5 percent, to $28.85 following news reports that the company’s vendors have started to halt shipments to the retailer. Sears has struggled for several months and has been selling off assets to raise cash to pay for its expenses.

Gap plunged $3.57, or 8.5 percent, to $38.40 in after-market trading after the company announce its CEO Glenn Murphy was stepping down early next year.

In other markets, the price of oil fell to its lowest level in 18 months on lower global demand and high supplies. Benchmark U.S. crude fell $1.54 to close at $87.31 a barrel on the New York Mercantile Exchange. Brent crude, a benchmark for international oils used by many U.S. refineries, fell 73 cents to close at $91.38 on the ICE Futures exchange in London.

*Image of “NYSE and surroundings” via Shutterstock