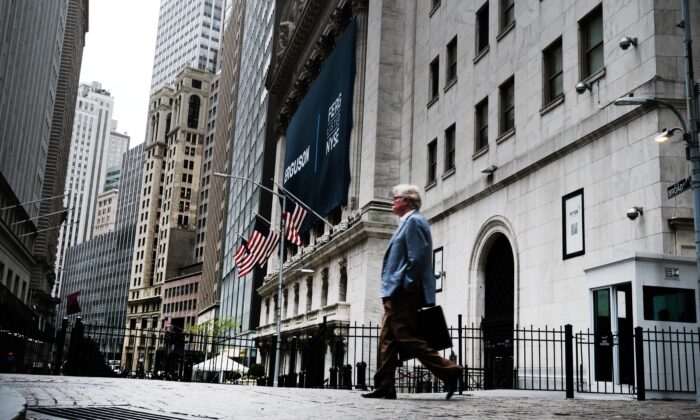 NEW YORK—Stocks fell in late morning trading on Wall Street Friday and are headed for another week of declines following a massive pullback two days ago.

All three are headed for drops of 3 percent or more for the week.

Technology stocks fell broadly and weighed down the market. Applied Materials, which produces chipmaking equipment, fell 5.1 percent. The tech sector has been particularly choppy and prompted many of the big swings in the market throughout the week. The lofty stock values for many companies in the sector give it more leverage in pulling the broader market higher or lower.

Bond yields fell. The yield on the 10-year Treasury fell to 2.81 percent from 2.85 percent late Thursday.

The stock market remains stuck in a slump amid worries about how inflation is squeezing businesses and consumers. Investors are also concerned about the Federal Reserve’s plan to aggressively raise interest rates and whether that will help temper inflation’s impact or crimp growth too much and send the economy into a recession.

Concerns about inflation have been growing heavier with Russia’s invasion of Ukraine pushing energy and some key food commodity prices higher. China took a renewed hit from lockdowns in key cities because of COVID-19 cases, but an interest rate cut from the Chinese regime has temporarily eased some anxiety.

Markets in Asia and Europe made solid gains.

Wall Street has been digesting earnings from retailers this week. The sector is a key focus as investors try to measure how much damage inflation is inflicting on company operations and whether higher prices on everything from food to clothing is prompting consumers to tighten their spending.

Retail giants Target and Walmart both had warnings this week about inflation cutting into finances. Discount retailer Ross Stores plunged 22.2 percent on Friday after cutting its profit forecast and citing rising inflation as a factor.