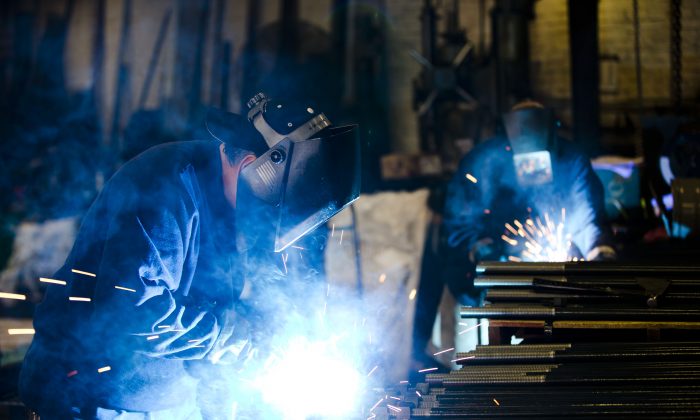 Welders fabricate anchor bolts for roads and bridges at the custom manufacture Fox Company Inc., in Philadelphia, on July 16, 2014. Beyond the turmoil shaking financial markets, the US economy remains sturdier than many seem to fear. (AP Photo/Matt Rourke)
Business & Economy

US Stands Strong Despite Fear Over Global Economy Slowdown

WASHINGTON—Beyond the turmoil shaking financial markets, the U.S. economy remains sturdier than many seem to fear.

The Dow Jones industrial average has lost 874 points since Oct. 8, largely over worries about another recession in Europe, a slowdown in China and world-spanning crises that include the Ebola outbreak and the rise of the Islamic State.

Yet economists aren’t reducing their forecasts for the U.S. economy. The International Monetary Fund, which heightened jitters by cutting its forecasts for global growth, has actually upgraded its outlook for the United States.

Mark Zandi, chief economist of Moody’s Analytics, is keeping his forecasts for U.S. growth at 2.2 percent growth for this year and 3.4 percent for 2015. He calls the plunge in stock prices a “garden-variety correction” for an inflated market, rather than evidence of a faltering economy.

The IMF spooked investors last week by cutting its forecast for global economic growth this year to 3.3 percent from 3.4 percent. Even so, the IMF now expects the U.S. economy to grow 2.2 percent this year, up from its June forecast of 1.7 percent.

Underscoring the bright outlook, the government said Thursday that the number of Americans who applied last week for unemployment benefits — a figure that reflects the number of layoffs — reached a 14-year low. Once you factor in the growth of the U.S. labor force, the latest number means the likelihood of being laid off is the lowest it’s been on government records dating to the early 1970s.

For now, investors remain so worried about weakness across the globe that they’ve been dumping stocks of every geographic or industry origin.

Near the top of their worries is Europe. The 18-country eurozone’s economy failed to grow at all in the second quarter of the year and might not do so in the third quarter, either. The IMF shaved its forecast for eurozone growth to 0.8 percent this year from its previous forecast of 1.1 percent.

Speaking at the Economic Club of Washington two weeks ago, Jeffrey Zients, director of the White House’s National Economic Council, called Europe “our No. 1 area of concern” and said the continent could slide into its third recession since 2008. In particular, the darkening picture in Germany — the heart of business activity for the region — is raising fears. After contracting 0.2 percent in the second quarter compared with the previous three months, Germany’s economy risks shrinking again in the third quarter. That would put its economy technically in recession, as defined by two consecutive quarters of economic contraction.

Still, economists downplay Europe’s effect on the American economy. For one thing, Europe’s struggles aren’t new. It’s been flailing for years. All the while, the U.S. economy has been steadily gaining momentum.

Overall, America has surprisingly little economic exposure to the world’s troubles. Exports account for less than 14 percent of U.S. activity, one of the lowest such shares in the world.

It’s American consumers who drive the U.S. economy. They account for nearly 70 percent of the economy. And in many ways, things are looking up for consumers.

Gasoline prices in the United States have fallen to an average $3.16 a gallon, the lowest price since 2011. Lower gas prices free up money for consumers to spend on other things — from clothing and restaurant meals to furniture and appliances — that help drive growth.

What’s more, the panic on Wall Street has delivered a bonus to homebuyers or homeowners who want to finance: As investors have fled to the safety of U.S. Treasurys, they have helped drive down long-term interest rates, including for mortgages. On Thursday, mortgage giant Freddie Mac said the average rate on a 30-year fixed mortgage hit 3.97 percent this week — its lowest rate since June 2013.

Consumers’ finances are in better shape, too, because many Americans have pared debt.

All that said, the United States won’t emerge unscathed from the stalling global economy. Companies that make up the Standard & Poor’s 500 index collectively generate 46 percent of their revenue overseas, according to S&P Dow Jones Indices. Their sales and earnings could be squeezed by slower growth in Europe and China. Eventually, if the trend continued, they might have to scale back hiring or cut jobs.

The powerhouse Chinese economy is expected to grow 7.4 percent this year, down from 7.7 percent in 2013, according to the IMF. The slowdown could hurt U.S. companies like 5+design, an architectural firm in Hollywood, California, that does 70 percent of its business in China.

“We’ve backed off new hires (in China) until we get a greater sense of where things are going,” says Michael Ellis, the firm’s managing principal. Still, he says his firm’s business in China is likely to increase.

The biggest threat to the United States may be the psychological effects of fear. Consumers who see their retirement accounts shrink along with stock indexes tend to feel more vulnerable and less likely to spend. It’s the reverse of the so-called wealth effect, which occurs when rising stocks make consumers feel wealthier and more confident.

And any dramatic increase in Ebola cases in the United States could at least temporarily freeze economic activity.

“People would stop traveling,” Moody’s Zandi says. “That would put a pall” over the economy.

From The Associated Press. AP staff writers Christopher S. Rugaber and Jim Kuhnhenn in Washington and Carlo Piovano in London contributed to this report.