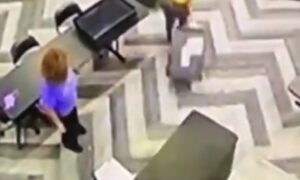 Nominee John L. Ratcliffe sits during a Senate Intelligence Committee nomination hearing at the Dirksen Senate Office building on Capitol Hill in Washington on May 5, 2020. (Gabriella Demczuk-Pool/Getty Images)
US News

No other organization has joined the IC since 2006.

“This accession reaffirms our commitment to securing outer space as a safe and free domain for America’s interests,” Ratcliffe said during a ceremony Friday. “American power in space is stronger and more unified than ever before. Today we welcome Space Force to the Intelligence Community and look forward to the power and ingenuity of a space security team unrivaled by any nation.”

Ratcliffe said that the integration of both organizations would increase the efficacy of their operations and highlight the significance of space intelligence, such as military observation and development efforts.

“Through sharing space-related information and intelligence, the IC and DoD increase integration and coordination of our intelligence activities to achieve best effect and value in executing our missions,” he said. “This move not only underscores the importance of space as a priority intelligence and military operational domain for national security, but ensures interoperability, future capability development and operations, and true global awareness for strategic warning.”

Raymond said that the adjoining of the new military branch to the IC would make the space domain accessible, and national security would be safeguarded.

“Today, we took action to elevate space intelligence missions, tradecraft, and collaboration to ensure the success of the Space Force, the Intelligence Community, and ultimately our National Security,” Raymond said. “This is a significant milestone, a clear statement that America is committed to a secure and accessible space domain. Our partnership will ensure the Space Force and the Nation remain always above any threat.”

Acting Under Secretary of Defense for Intelligence and Security Ezra Cohen added, “Today’s change aligns our newest service with the other members of the Defense Intelligence Enterprise and will help ensure our efforts are coordinated and synchronized across all domains of warfare.”

President Donald Trump last year said that the U.S Military was developing a “super-duper missile” that could travel “17 times faster than what we have right now.”

“We’re building, right now, incredible military equipment at a level that nobody has ever seen before. We have no choice. We have to do it, with the adversaries we have out there,” Trump said, singling out Russia and China.