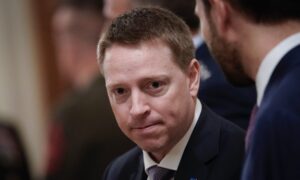 In response to the Chinese Communist Party (CCP)’s all-encompassing campaign to subvert freedoms worldwide, the United States should have its own form of ideological warfare against the Party “to expose the evil nature of the regime, its corruption, and its crimes against humanity,” says China expert and journalist Bill Gertz.

Such measures are necessary, according to Gertz, because the CCP is waging a low-level form of warfare, which stops short of actual conflict, against the United States and free world, but the West is not doing enough to counter it—especially on the information front.

Ideological and information warfare “is the most important thing that can be done right now,” Gertz,  national security correspondent for The Washington Times and author of the book “Deceiving the Sky,” said in a recent interview with EpochTV’s “Crossroads” program.

According to Gertz, part of the problem with the United States’ China strategy is that successive administrations, both Democrat and Republican, have failed to recognize that communist China is a Marxist-Leninist state that sees itself as “engaging in a war against capitalism led by the United States as their main enemy.”

Currently, U.S. China policy is framed in terms of “strategic competition,” but Gertz thinks the administration needs to move beyond this concept to “recognize China as an enemy not just to the United States, but also to freedom and democracy for all nations of the world.”

“This is going to be the challenge for the United States, which is strongly divided internally, no doubt with help from the Chinese Communist Party through its influence operations,” he said. “We need to really get focused on the China threat.”

The expert urged the Biden administration to “step up its game” on the information warfare front, describing its current efforts as “woefully inadequate.” The U.S. State Department’s Global Engagement Center—an interagency body tasked with countering foreign propaganda and disinformation campaigns— has done “very little” on this front, Gertz said, adding the administration’s public diplomacy has also been “very weak and ineffective.”

Gertz described the U.S. withdrawal from Afghanistan and the collapse of the U.S.-backed Afghan government as a “strategic success” for Beijing.

The regime “has been driving home the point that having U.S.-backed troops on its western border is a major threat to the Communist Party,” he said.

Meanwhile, the CCP has capitalized on the United States’ chaotic withdrawal from the country for propaganda, to portray that the “U.S. system has failed and that the Chinese system is on a roll,” Gertz said. Chinese state media have also been pushing the narrative that the United States cannot be relied upon to defend Taiwan if Beijing attacks.

This aggressive rhetoric should serve as a “real wake-up call” for the United States, he said.

The Chinese regime is also looking to make economic inroads into Afghanistan, eyeing its estimated $1 trillion in mineral deposits and extending the Belt and Road Initiative, Beijing’s massive infrastructure investment project. Though such plans may not come to fruition in the country given the destabilizing security situation, Gertz said.

He also noted that the CCP’s opposition to all religions, especially Islam, would be the “breaking point” between the Taliban and the CCP.

“The Taliban is going to recognize that they’re dealing with an atheistic, communist, totalitarian state that is not looking out for its interest,” Gertz said.

“So for the Chinese, the so-called Chinese model of governance to have any chance of success in Afghanistan under the Taliban is close to zero.”