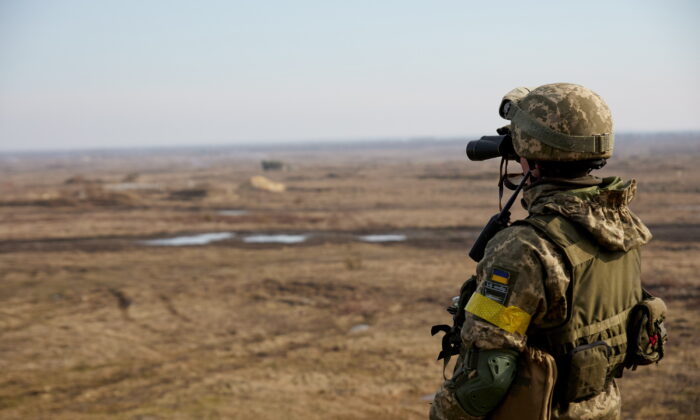 A service member of the Ukrainian armed forces takes part in tactical military exercises at a training ground in the Rivne region, Ukraine, on Feb. 16, 2022. (Ukrainian Presidential Press Service/Handout via Reuters)
Russia-Ukraine War

The United States is sending 100 Switchblade drones to Ukraine as part of an arms package, a Pentagon official confirmed on March 30.

The drones, developed by AeroVironment, are a type of “loitering munition” that is lightweight and small enough to fit in a backpack. Launching from a tube, the Switchblade will fly into a target and detonate a small explosive warhead.

Ukrainian officials asked for the drones to use against Russian forces, Celeste Wallander, assistant secretary of defense for international security affairs, told lawmakers on March 30.

“We have committed 100 Switchblade tactical unmanned aerial systems to be delivered in the most recent package of presidential drawdown,” she told the House Armed Services Committee. “We’ve heard the Ukrainians and we take that request very seriously.”

About a week ago, Pentagon spokesman John Kirby told reporters that the weapons would arrive in Ukraine in the near future. He didn’t elaborate.

AeroVironment’s website notes that there are two versions of the weapons system—the Switchblade 300 and 600. It isn’t clear if the Pentagon sent the 300 or 600 models, or both, to Ukraine.

The 300 models, which weigh about six pounds, can be controlled up to six miles, using a camera and GPS locator to track, identify, and engage targets. The warhead is an explosive charge equivalent to a 40-millimeter grenade and is generally employed to destroy light armored vehicles and personnel, according to AeroVironment.

The 600 models are much larger, weighing about 50 pounds; they can fly out to about 25 miles and deliver a Javelin warhead, which can be used against heavily armored vehicles, according to the company.

Western officials have said that Ukrainian forces have successfully used Javelin anti-tank systems since the start of the conflict on Feb. 24. A number of U.S. intelligence officials have publicly asserted that Russian forces have been bogged down in Ukraine for weeks and haven’t captured any major city.

So far, the United States has provided more than $2 billion in security assistance to Ukraine since President Joe Biden took office in early 2021. The Switchblade 300 is believed to cost as little as $6,000 per unit, according to reports.

Biden called Ukrainian President Volodymyr Zelenskyy on March 30 to discuss “the ongoing work by the United States and its allies and partners to deliver military, economic, and humanitarian assistance to Ukraine and to impose severe costs on Russia for its brutal aggression against Ukraine,” according to the White House.

The two leaders “talked about specific defensive support, a new package of enhanced sanctions, macro-financial and humanitarian aid,” Zelenskyy wrote on social media, adding that he also gave an “assessment of the situation on the battlefield and at the negotiating table.”