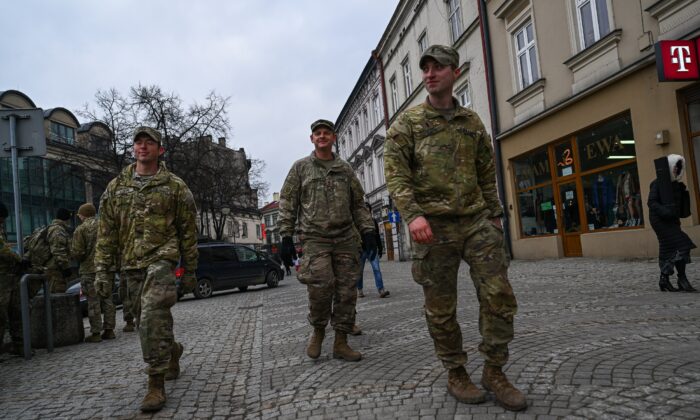 US to Send Additional Troops, Tankers to Europe

The United States ordered the deployment of 500 additional troops to Europe to augment the forces already there, a U.S. defense official said on March 7.

“These additional personnel are being positioned to respond, obviously, to the current security environment caused by Russia’s unprovoked invasion of Ukraine, and certainly to help reinforce and bolster deterrence and defense capabilities of the NATO alliance,” Pentagon spokesman John Kirby told reporters in Washington.

The 500 troops, which are primarily “small units” and “enablers,” will come from the 10,000 to 12,000 troops that were put on heightened alert to potentially be deployed to Europe in February, around the time the war started.

“These troops are very much in support of forces that were already sent forward,” the official said.

In addition to sending KC-130 refueling tanker aircraft and about 150 troops to Greece and about 40 service members from Fort Stewart in Georgia to help with air support operations in Poland and Romania—two countries that border Ukraine—the deployment includes about 300 troops from an ordnance company out of Fort Bragg in North Carolina and a similar group from Fort Stewart to Germany, another NATO ally.

The United States has been bolstering its presence in Europe since early February, deploying or ordering the deployment of around 11,700 troops that month, while repositioning other units that were already in the region to countries near Ukraine.

President Joe Biden has said U.S. troops won’t fight inside Ukraine but are ready to respond if Russia attacks any NATO members, citing NATO rules that treat an attack on any member as an attack on all members.

“We are not going to send U.S. troops to fight in Ukraine against Russia. The president is not going to do that,” White House press secretary Jen Psaki said on March 7.

Russia opposed Ukraine’s hopes to enter NATO and has said a condition of withdrawing troops from Ukraine would be an amendment of the country’s constitution to bar its entry into blocs such as the alliance. A third round of negotiations between Russia and Ukraine ended March 7 with no solution to the conflict.

French President Emmanuel Macron, after speaking with world leaders including Biden, told a campaign meeting in Poissy, France, that he doesn’t think there will be “a real negotiated solution” in the coming days or weeks.

“I hope so, and we are doing all that we can to help it. It depends on the two parties, but it also depends on the reality on the ground,” he said. “I think that in the short-term, this war will continue.”