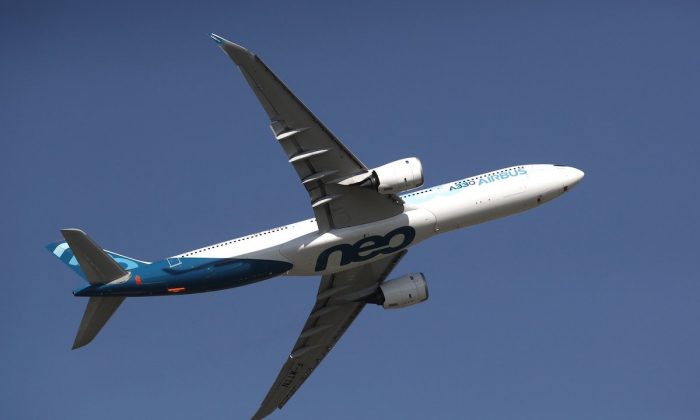 US Seeks to End a Long-Running Trans-Atlantic Dispute

WASHINGTON—The Trump administration is stepping up pressure on the European Union to end the long subsidy fight involving the world’s biggest aircraft makers.

The U.S. Trade Representative (USTR) last week proposed $4 billion in potential additional tariffs on goods from the EU, in response to bloc’s subsidies for European aircraft manufacturer Airbus. This was on top of the preliminary list announced by the USTR in April.

Critics argue that the move will escalate trade tensions between the United States and the EU. However, tariffs against EU’s aircraft subsidies are long overdue and are in line with World Trade Organization (WTO) rules, according to the USTR.

The United States has long argued that the EU—especially France, Germany, Spain, and the UK—unfairly subsidized Airbus, putting Boeing at a competitive disadvantage.

The dispute dates to 1985, when the United States began raising concerns about subsidies provided to Airbus. In July 1992, the United States and the Europeans reached an agreement limiting government aid for the development of new aircraft programs to 33 percent of the project’s total development costs.

However, Washington later claimed that the EU didn’t live up to the bilateral agreement, and filed a case with the WTO in 2004. The WTO concluded in 2011 that the Europeans provided Airbus $18 billion in subsidies from 1968 to 2006.

WTO found that the so-called “launch aid” subsidies, particularly, caused Boeing to lose sales of more than 300 aircraft globally, according to the USTR. Launch aid is the biggest and most impactful of the subsidies, allowing Airbus to get highly subsidized loans for the development of new products.

The EU made adjustments to the aircraft subsidies after the WTO’s ruling. However, the WTO determined last year that there were additional violations, which has led the United States to seek countermeasures.

“This case has been in litigation for 14 years, and the time has come for action. The Administration is preparing to respond immediately when the WTO issues its finding on the value of U.S. countermeasures,” U.S. Trade Representative Robert Lighthizer wrote in a statement on April 8.

The United States loses $11 billion each year because of EU subsidies to Airbus, according to USTR estimates. However, this amount is subject to a ruling from the WTO, which is expected to come in the next few months.

According to Boeing, due to the subsidies, Airbus has captured 50 percent of the large commercial airplane market.

“There are no more appeals left for the EU to pursue,” the company wrote on its website. “Now begins the process for the United States to impose billions of dollars in WTO-approved sanctions, which should be in place this year.”

The USTR released in April a preliminary list of EU goods that would be subject to increased tariffs. The initial list had more than 300 products, including large commercial aircraft, motorcycles, dairy products, and wine. And last week, the agency added 89 more goods—including olives, Italian cheese, and Scotch whiskey—to the list after public comments.

In the 14-year battle, the EU has also accused the United States of illegally subsidizing Boeing. The EU brought a counter case against the United States in WTO, claiming that Boeing received $23 billion in indirect subsidies through NASA and Department of Defense contracts for research and development projects. It also challenged federal, state and local tax breaks, and government support for infrastructure received by Boeing.

According to Citi analysts, it’s difficult to compare the subsidies to determine who provided more.

“The EU provided loans, which are intended to be repaid, whereas the United States gave other forms of subsidies,” a Citi report stated, and hence “the nominal amounts cannot be compared to establish which side gave more and how much of that was illegal.”

“We would expect that if the United States goes ahead with these tariffs, the EU will impose counter-tariffs,” the analysts wrote, adding that Airbus may end up selling fewer planes to the United States as a result of tit-for-tat reactions.