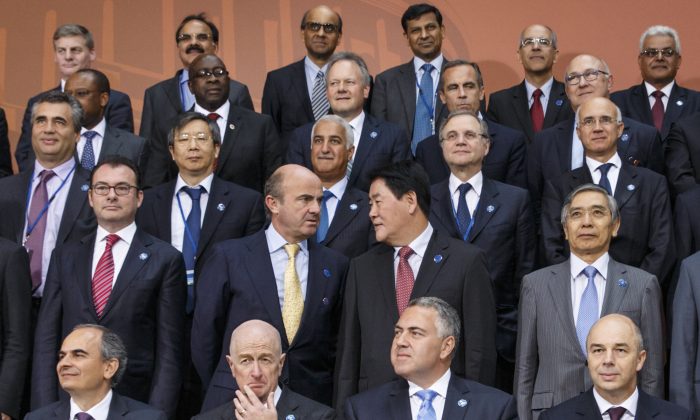 Finance ministers and central bank governors of the Group of Twenty nations gather for photo at the International Monetary Fund and World Bank meetings in Washington, Friday, Oct. 10, 2014. From left in front row are Erdem Basci, governor of the Central Bank of the Republic of Turkey, Glenn Stevens, Australia's central bank governor, Australia's Treasurer Joe Hockey who is chair of the G-20, and Russian Minister of Finance Anton Siluanov. (AP Photo/J. Scott Applewhite)
Business & Markets

US Says Some Nations Not Doing Enough on Economy

WASHINGTON—The United States expressed frustration that a number of countries were not doing enough to boost growth in their economies as finance ministers from the world’s largest economies conveyed determination to prevent a slide into another global recession.

“European leaders should focus on recalibrating policies to address persistent demand weakness,” Lew said in comments prepared for a session of the policy-setting committee of the International Monetary Fund, which was scheduled to conclude its discussions Saturday.

The policy-setting committee of the World Bank also was to meet, and both groups were expected to return to addressing the Ebola crisis in West Africa.

He said China’s economy remained strong but risks had risen and the country needed to put more emphasis on consumption-led growth.

Lew did not mention Germany by name, but it was clear that his remarks on Europe focused on that nation’s reluctance to do more to stimulate growth. “Countries with external surpluses and fiscal flexibility” needed to do more to boost growth, he said. Germany, Europe’s largest economy, ran a large trade surplus last year.

Even some of Germany’s European partners have said countries in the 18-nation euro zone should shift away from the deficit-cutting policies Germany has championed and boost investment spending to avoid being stuck in Japanese- style stagnation.

It was against that background that G-20 finance ministers and central bank presidents met for two days of talks that wrapped up Friday in advance of the IMF-World Bank meetings.

After those discussions, the ministers unveiled plans for a global initiative to build roads, ports, railways and other infrastructure projects to help boost world growth by $2 trillion over the next five years and create millions of jobs.

The G-20 was being led this year by Australia, which was scheduled to host a leader’s summit next month in Brisbane. Australian Treasurer Joe Hockey, who chaired the finance discussions, told reporters that the plan the G-20 group developed involved more than 900 individual initiatives with the potential to lift growth by 1.8 percent over the next five years. He said details would be disclosed at the leaders’ summit.

While developing the five-year plan for infrastructure projects, the G-20 financial officials were less successful in their efforts to deal with immediate threats from slowdowns in Europe, Latin America and China. The group did not issue a communique, but individual ministers said economic problems were discussed in the G-20 sessions.

“We as a group do not want to settle for mediocre growth,” Canadian Finance Minister Joe Oliver told reporters after the end of the G-20 sessions. “We don’t think we have to.”

From The Associated Press. AP writers Paul Wiseman and Matthew Pennington contributed to this report.