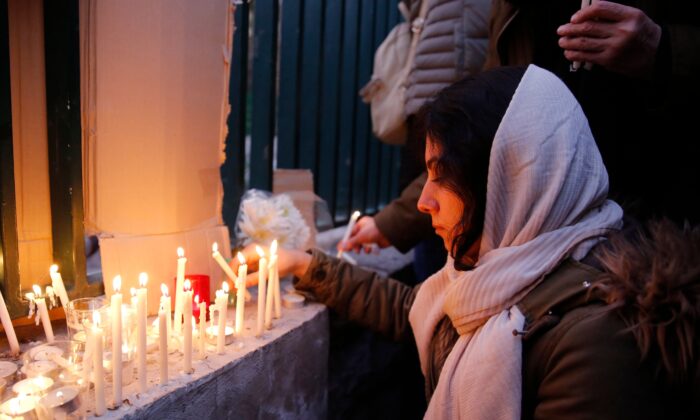 An Iranian lights candles for the victims of Ukraine International Airlines Boeing 737 during a gathering in front of the Amirkabir University in the capital Tehran, on Jan. 11, 2020. (AFP via Getty Images)
US News

US Says It Stands in Solidarity With Iranian Protesters, Condemns Arrest of British Ambassador

The United States has expressed its support for Iranian protesters and condemned the arrest of the UK Ambassador Rob Macaire, who was briefly detained during mass protests in Tehran on Jan. 11.

President Donald Trump on Saturday said he stands in solidarity with the thousands of Iranian protesters who took to the streets over the weekend after the Islamic Republic admitted it had accidentally shot down a Ukraine-bound airliner, killing all 176 people on board.

The president took to Twitter to share an impassioned message which was written in both Farsi and English.

“To the brave, long-suffering people of Iran: I’ve stood with you since the beginning of my Presidency, and my Administration will continue to stand with you. We are following your protests closely, and are inspired by your courage,” he wrote.

In a second tweet shortly after, Trump urged Tehran to “allow human rights groups to monitor and report facts from the ground on the ongoing protests by the Iranian people.”

“There can not be another massacre of peaceful protesters, nor an internet shutdown. The world is watching,” he added.

The government of Iran must allow human rights groups to monitor and report facts from the ground on the ongoing protests by the Iranian people. There can not be another massacre of peaceful protesters, nor an internet shutdown. The world is watching.

Secretary of State Mike Pompeo also tweeted his support alongside a video of what appeared to be protesters in Iran.

Also on Saturday, the United States urged Iran to issue an apology for briefly detaining the British ambassador to Tehran, Rob Macaire, who was accused of inciting protests against the government at Amirkabir University.

“The Iranian regime arrested the British ambassador to Iran. This violates the Vienna Convention, which the regime has a notorious history of violating. We call on the regime to formally apologize to the UK for violating his rights and to respect the rights of all diplomats,” State Department spokeswoman Morgan Ortagus tweeted.

“The arrest of our Ambassador in Tehran without grounds or explanation is a flagrant violation of international law,” Foreign Secretary Dominic Raab said in a statement.

“The Iranian government is at a cross-roads moment. It can continue its march towards pariah status with all the political and economic isolation that entails, or take steps to de-escalate tensions and engage in a diplomatic path forwards,” Raab added.

It is not clear who he was arrested by, however he is said to be “safe and well” in the British embassy after being released a “few hours later” Tasnim news agency reports. Macaire will be summoned on Monday for further explanations, they added.

Thousands of protesters took to the streets in Tehran on Saturday with renewed strength after Iran’s Revolutionary Guard acknowledged that it accidentally shot down the Ukrainian jetliner bound for Kiev early Wednesday, killing at least 130 Iranian citizens and the foreign nationals on board.

Others called for Khamenei to resign, chanting “Death to liars,” “Down with the dictator,” and “Our enemy is right here, they’re lying when they say it’s the U.S.,” according to local independent journalists in social media posts seen by The Epoch Times.

Protests continue in Tehran. Protesters are chanting many of the same slogans from #IranProtests of November 2019

They’re chanting: “The regime told us our enemy is the US. But actually, our enemy is right here” [in reference to the regime itself]. pic.twitter.com/OjoMw2PMI2

Iran initially denied any responsibility, dismissing mounting evidence cited by international governments that its forces were responsible for the loss of civilian life. It later admitted to “human error,” with General Amir Ali Hajizadeh, the head of the Guard’s aerospace division, saying that his unit accepts full responsibility for the shootdown.

In an address broadcast by Iran’s state TV, Hajizadeh said he takes “full responsibility” for the crash and “will obey whatever decision is taken.”

“When I found out what had happened, I wanted to die. I said, I would rather die rather than be a witness to such an incident,” he added.