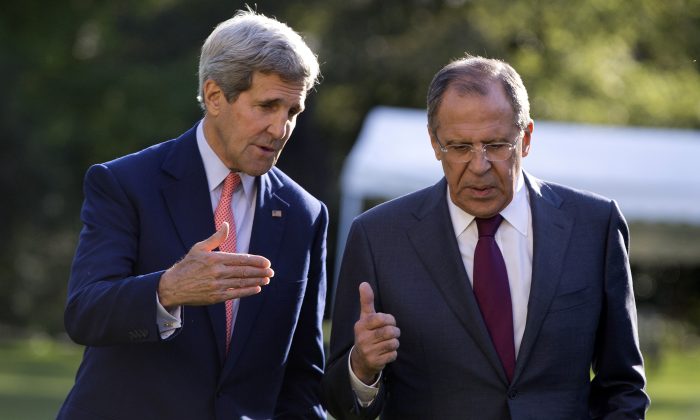 US Secretary of State John Kerry (L) and Russian Foreign Minister Sergey Lavrov talk as they walk together on the grounds of the Chief of Mission Residence in Paris, France, Tuesday, Oct. 14, 2014. The top US and Russian diplomats are hoping to find a way to begin reversing a yearlong spike in tensions stemming from Ukraine's revolution and civil war. (AP Photo/Carolyn Kaster)
Europe

PARIS—The United States and Russia vowed Tuesday to renew cooperation on a broad array of global security matters, including intelligence sharing on Islamic State militants, even as the two powers remained deeply at odds over the crisis in Ukraine.

Although Secretary of State John Kerry didn’t use the term “reset” — a relationship-mending term President Barack Obama coined in his first term to tighten US-Russian ties — he employed familiar language about managing differences and forging a better partnership on matters where they agree.

After meeting for more than three hours in Paris with Russian Foreign Minister Sergey Lavrov, Kerry said both sides need to recognize they have “major responsibilities” as world powers, from combating Islamist extremism in the Middle East to dealing with Iran and North Korea’s nuclear programs. As a concrete example of their work together, he said the U.S. and Russia would start sharing intelligence on the Islamic State militants, which the U.S. and allies are fighting in Iraq and Syria.

The nations play a “special role” in the world, he said. “We can cooperate better together to increase the effectiveness of settling problems for larger society. That especially concerns the fight against terrorism, which has now become the main threat to the whole Mideast.”

The divide in their positions over Ukraine clearly persisted, however. Russia and its allied forces in the country must halt remaining violence in the restive east, pull back forces and weapons and release any hostages, Kerry said, noting that he’d told Lavrov that any independence referendums wouldn’t be recognized by the world.

The tone of Kerry’s news conference harkened back to the Obama administration’s first term, when Obama sought to reset ties between Washington and Moscow that were badly frayed by the 2008 war in Georgia and other tensions. The spirit of goodwill yielded a nuclear arms reduction pact and some other diplomatic successes, but the relationship became increasingly defined by hostility after Vladimir Putin’s return to the presidency in 2012. The Ukraine crisis sent them to a post-Cold War low.

The “bulk” of Tuesday’s talks focused on issues other than Ukraine, Kerry stressed. He highlighted the international campaign against the Islamic State group in particular, saying both countries recognize the group “has absolutely no place in the 21st century.”

“No civilized country should shirk its responsibility to stand up and be a part of this effort,” Kerry said. He said Lavrov also signaled that Russia would provide arms and equipment to help strengthen Iraq’s army.

Ukraine’s crisis began when its Moscow-supported leader backed out of an economic agreement with the European Union last year and sparked the protests that would lead to his ouster. After a new government turned toward the West, Russia seized and annexed the Crimean Peninsula. In the east, it has provided support for armed pro-Russian groups despite rising U.S. and European economic sanctions.

The formula for a Ukraine breakthrough is simple — an easing of Western sanctions against Russia in exchange for an end to Russia’s destabilization of its neighbor — though getting there has been far from easy. Kerry said any evaluations on lifting or suspending sanctions depend on Russia’s actions.

There are some recent causes for optimism, however. Most Russian troops appear to have left the scene of the fiercest fighting between government forces and separatist rebels, according to Ukrainian military officials. And with economic penalties beginning to bite in Russia, Putin is heading to Milan, Italy, for talks with Ukraine’s president and European Union leaders later this week.

Violence continues, but at a lesser rate, despite a cease-fire last month between the Ukrainian government and rebels. Ukraine still accuses Russia of allowing fighters across the border and Kerry stressed that the two countries need to internationally recognized and secure borders.

Putin, for his part, has ordered some 17,600 Russian troops who were posted near the Ukrainian border to return to their permanent bases. It may be a sign of goodwill ahead of his European diplomacy. Russia has never acknowledged sending troops inside of Ukraine.

From The Associated Press. AP writer Angela Charlton contributed to this report.