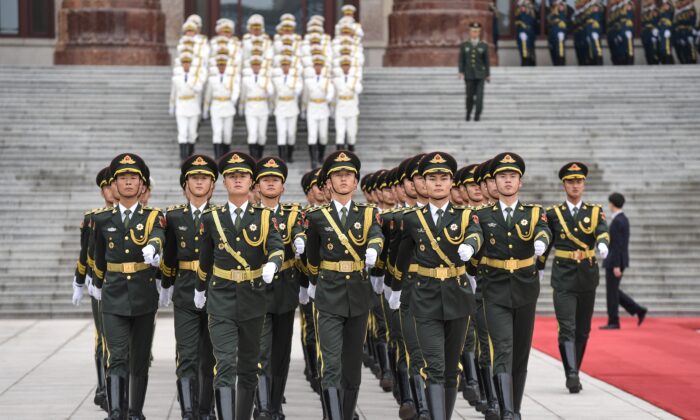 Military honor guards prepare for a welcome ceremony with French President Emmanuel Macron and Chinese leader Xi Jinping at the Great Hall of the People in Beijing on Nov. 6, 2019. (Nicolas Asfouri/AFP via Getty Images)
By Cathy He

A congressionally mandated report lays out a comprehensive U.S. strategy, involving nearly 100 recommendations, to counter the Chinese regime’s threats in the Indo-Pacific region.

“Business as usual in Washington will be insufficient to address the China challenge in the Indo-Pacific,” the report states. “The China challenge—too often described as a problem for the future—is here and now.”

To respond to the Chinese regime’s ambitions in the region, the United States will need to compete across several domains—not only in the military sphere, according to the report. These include economics, technology, diplomacy, ideology, governance, and human capital.

The report’s authors, a bipartisan group of experts who have served on both sides of the aisle in Congress and in several administrations, argue for a “whole-of-government” approach to combat the threat.

They called on Washington to “enlist a broader set of stakeholders in bolstering U.S. competitiveness, including technology companies, media, universities, civil society, and the private sector.”

“This assessment outlines a path for competition with China and other adversaries that will utilize all tools available to the United States,” Sen. Jim Inhofe (R-Okla.), chairman of the Senate Armed Services Committee, said in a CNAS release.

“A whole-of-government approach isn’t just necessary to compete effectively with China; it’s also a reminder that just like our security, our prosperity and the values we share with allies and partners are at stake in this competition.”

The Chinese regime, the report stated, has been exporting its high-tech surveillance and censorship through the “One Belt, One Road” (also known as Belt and Road) initiative, an infrastructure investment project that seeks to link Europe, Asia, Africa, and the Middle East through a network of railways, ports, and roads.

“Through the provision of technology, funding, and know-how, Beijing’s digital expansion is making repression easier and more attractive to governments with weak democratic institutions, and further entrenching the rule of fellow authoritarian regimes,” it stated.

In response, the report recommends that the Trump administration establish a U.S. digital development fund that would support information technology projects in the region.

The United States should also step up efforts to offer an alternative to China’s Huawei, the dominant player in the global 5G market, by working with industry leaders and its allies to “identify market-driven solutions to revitalize the health of the global 5G ecosystem,” the report stated.

Along with increasing U.S. diplomatic exchanges with Asian countries, the report emphasized that Washington should boost measures to counter Beijing’s aggressive propaganda and messaging, which promotes “a narrative of its inexorable ascendance coupled with America’s inevitable decline.”

Democratic principles, such as the rule of law, and freedom of the press and religion “are all vital U.S. assets that … can be trumpeted abroad—particularly when contrasted with the Chinese Communist Party’s [CCP] tightening chokehold on the rights and freedoms of the Chinese people,” it stated.

At the same time, the United States should work to expose, both at home and abroad, the CCP’s repressive actions.

The authors urged the administration and lawmakers to lead a “systematic campaign” to educate the public—including universities, civil society, and the private sector—about the nature of the Chinese regime’s threats. In doing so, officials and lawmakers should clearly differentiate between the Chinese people and the CCP, to avoid allegations of mischaracterizing the China challenge in racial terms.

Information gathered by U.S. intelligence agencies about the CCP’s illegal and corrupt practices against its own people and abroad could be declassified to better inform the public about the regime’s malign activities, the report suggests.

The authors also recommended that the United States convene regular dialogues with its allies to share best practices for rooting out the CCP’s influence in politics, media, entertainment, academia, and the private sector.