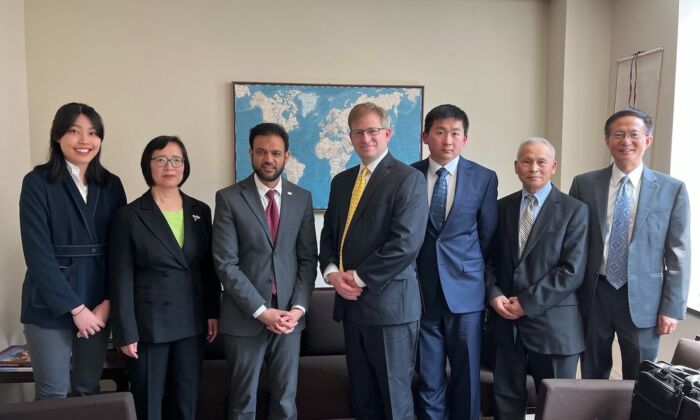 U.S. State Department officials met six representatives of the spiritual discipline Falun Gong on April 25 for an update on the decades-long ongoing persecution in China.

The day marks the 23rd anniversary of a peaceful appeal dated back to 1999, when an estimated 10,000 adherents of Falun Gong, a meditation practice that was first introduced to the public in northeastern China in the early 1990s, gathered around the Chinese communist headquarters in Beijing.

The attempt to appeal to authorities for an environment to practice their faith without state interference or harassment, however, turned out to be in vain and the regime soon launched a long-lasting campaign to eradicate the spiritual group, which continues today.

“No one deserves to suffer harassment, torture, or imprisonment for their faith,” said Rashad Hussain, U.S. Ambassador-at-Large for International Religious Freedom, in an April 26 Twitter post.

A day earlier, Hussain condemned in his opening remarks Beijing’s ruthless persecution of Falun Gong practitioners in China as being unacceptable and intolerable, according to Minghui.org, a website that documents the CCP’s campaign of persecution against Falun Gong.

“The ambassador made clear his intention to be very forceful in confronting the CCP about the persecution of Falun Gong,” Levi Browde, executive director of the Falun Dafa Information Center, who also attended the April 25 meeting, told The Epoch Times.

A leaked document has shown that despite struggling to curb the pandemic in China, the communist regime continued to persecute Falun Gong adherents. Yet while lockdowns have been lifted in many cities of China, the number of arrests and harassment against Falun Gong practitioners has risen sharply, practitioners said during the meeting.

Chinese authorities arrested Fang Bin, the first Chinese citizen journalist who reported on the beginnings of the COVID-19 pandemic in central China, in early 2020. Being a Falun Gong practitioner, Fang suffered “especially long” detention and he has not been released yet, according to Minghui.org.

Ji Yunzhi, a Falun Gong practitioner and the mother of an attendee at the Monday meeting, was arrested on Feb. 1, three days before the opening ceremony of the Winter Olympics in Beijing, and died of torture while in custody last month.

Zhang Yuhua was one Falun Gong practitioner present in the meeting. Zhang herself had spent a total of 7 1/2 years in prison due to her beliefs. Her husband Ma Zhenyu, a radar engineer, experienced repeated torture during his 12 years in detention. In 2019, he was denied meals while forced to run 12 miles every day under the hot summer sun. Just one week before his release from detention, authorities drew “3 large tubes full of his blood,” Zhang said in a speech at the meeting. Ma has been under strict surveillance since his release in 2020. There’s a special camera above the door of his apartment that’s monitored by the police, she said.

“He is specially targeted and must go through special security checks at public transport like the railway station or in the train car and at the airport. If the ‘610 Office’ find Falun Gong material in his bags, they can arrest him,” Zhang said, referring to a body that is specifically charged with persecuting Falun Gong adherents.

According to Browde, Hussain asked representatives to send the department the latest round of phone call investigations of the hospitals where state-sanctioned organ harvesting of Falun Gong adherents in China takes place.

Such human rights crimes were first brought to light in 2006 by a whistleblower whose ex-husband is a brain surgeon in northeast China who participated in removing the corneas of about 2,000 anesthetized Falun Gong prisoners.

Human rights researchers have been making phone call investigations of medical professionals at Chinese hospitals in the past decades. In the calls, they present themselves as a potential patient needing an organ. During many of the attempts, medical professionals have admitted that the live organs come from adherents of Falun Gong,

It was not until 2019 that an independent tribunal concluded, after a yearlong investigation, that the practice had occurred for years on a substantial scale and continues to persist.

“Medical personnel in military hospitals that were the predominant perpetrators of organ harvesting have been moving quietly into civilian hospitals in an attempt to avoid attention,” Browde told The Epoch Times.

“We look forward to working with his office and other areas of the U.S. government to continue sanctions and other measures to penalize, in real terms, the perpetrators of the wrongful detention, torture, and killing of Falun Gong practitioners,” he said.

The State Department on March 21 announced the imposing of visa restrictions on Chinese officials responsible for “repressive acts” against ethnic and religious minorities inside China and abroad, including the United States.

It was not specified who would be targeted or how many were subjected to the new restrictions.