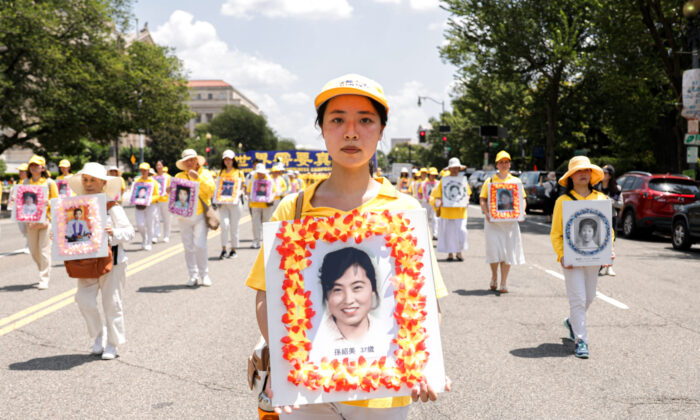 Falun Gong practitioners take part in a parade marking the 22nd anniversary of the start of the Chinese regime’s persecution of Falun Gong in Washington on July 16, 2021. (Samira Bouaou/The Epoch Times)
Beijing 2022 Olympics

NEW YORK—The opening ceremony of the Beijing Winter Olympic Games contained all the pageantry that one might expect from an authoritarian regime eager to burnish its global image: Hundreds of children holding dove-shaped props formed the shape of a heart while they danced in a star-lit stadium as green and white fireworks spelled out the word “spring” overhead, a reference to the Lunar New Year celebration.

“One world, one family,” so read the slogan displayed to spectators in the partially filled “Bird’s Nest” National Stadium on Jan. 4, echoing a call for unity that the Chinese regime has often repeated on the world stage over the past few years.

With this glitzy show, the Chinese Communist Party (CCP) is trying to divert the world’s attention from much grimmer realities, including the detention, torture, and death taking place mere miles away from Olympic venues, according to activists.

One detainee was so emaciated that she was taken home on a stretcher and slapped with a 2 1/2-year sentence days later. Another detainee spent his entire 30s in prison, only to receive another long sentence years later. A third one lost her husband to persecution and is now behind the bars herself. All three became regime targets merely for persisting in practicing their faith.

Their stories and others were featured in an interactive map released on Feb. 4, the same day that Beijing became the world’s first city to host both the Summer and Winter Games. The map, developed by the Falun Dafa Information Center, spotlighted more than a dozen “persecution hotspots” in and around Beijing, where adherents of the persecuted faith group Falun Gong are languishing for not surrendering their beliefs.

It’s the first comprehensive map of its kind to allow “a glimpse inside the places the Chinese Communist Party does not want you to see,” according to the New York-based human rights group.

“There is no other regime on earth that has the audacity, and international clout, to host the Games while simultaneously detaining such large numbers of prisoners of conscience in settings ripe with abuse and torture,” he said in a statement.

Adherents of Falun Gong have been subjected to more than two decades of persecution under the communist regime, which deemed the group a threat after the practice exploded in popularity during the 1990s. An estimated 70 million to 100 million people were practicing Falun Gong by the end of that decade, according to estimates at the time.

A half-dozen torture facilities that hold Falun Gong detainees are roughly 10 to 20 miles away from Beijing’s major Olympic venues, from the National Stadium to the National Speed Skating Oval, where the speed skating competition commenced on Feb. 5.

“You could literally watch the speed skating Olympic event, walk out the door from the oval, and walk 14 miles due, east and you are at a prison camp where people are being incarcerated—at least one case for nine years—for their faith in Falun Gong,” Levi Browde, executive director of Falun Dafa Information Center, told The Epoch Times.

It took a month for researchers to verify the details and complete the map. Many of the facilities have both a public and private name and even two addresses to avoid outside scrutiny. Some of them, serving concurrently as labor camps, have adopted a secondary name as a cover for their slave labor business, according to the researchers.

Despite his years of research into the persecution campaign, seeing the facilities visually was still striking, according to Browde.

“That’s sort of like going to see Yankee Stadium and walking down to somewhere in Central Park, where there’s a prison camp,” he said.

Long Years Behind the Bars

The detainee that Browde cited was 52-year-old Shi Shaoping, who holds a master’s degree from the photochemical institute at the country’s lead national scientific institution, the Chinese Academy of Sciences.

While Shi was arrested at his home in November 2019, his family didn’t hear any news about his whereabouts until April 2021. That’s when police notified them of Shi’s nine-year sentence at the Beijing No. 2 Prison, a facility for death-row inmates and those serving life sentences.

Shi had already served a 10-year prison sentence because of his faith prior to this arrest. At Qianjin Prison, which also is on the interactive map, Shi was made to sit motionless on a small stool for up to 20 hours daily over a period of a few years, according to Minghui.org, a U.S.-based clearinghouse for the persecution of Falun Gong in China. On the coldest winter days, guards would leave the window open, causing Shi’s body to shiver. He was once barred from using the restroom for an entire month.

Sixteen miles away from the same skating venue is the Beijing Women’s Prison, where artist Xu Na was held until last month.

Months before the Beijing Summer Olympic Games in 2008, police arrested Xu and her husband Yu Zhou during an “Olympic check,” after discovering Falun Gong books in their car. Yu, a folk singer and musician, died in detention 11 days later, on the eve of Chinese New Year. Xu subsequently spent three years in detention.

About 22 miles northwest of National Stadium, the Changping District Detention Center held Wang Chaoying for distributing informational materials about Falun Gong. The 68-year-old was hospitalized three times over a six-month period between 2020 and 2021. She was sent home on a stretcher after having lost 40 pounds. Ten days later, the court delivered her verdict: a 2 1/2-year prison sentence.

Over the past two years, more than 31,000 arrests and harassment cases of adherents have taken place, according to Minghui.org. Records from the site show that about 1,800 of them were sentenced and more than 200 people have died over the same period; however, human rights experts believe the true death toll to be vastly higher because of the challenge of getting official information from China.

Thirteen miles north of the skating oval is the Beijing Juvenile Correction Facility where Liu Jiying, who escaped to New York in 2016, first crossed paths with Xu in 2001, Liu told The Epoch Times. The facility was actually an underground forced labor facility, where they became practically slave laborers. Both were later transferred to Beijing Women’s Prison, then still under construction. Liu was serving an eight-year jail term, while Xu was serving a five-year sentence.

Each prison unit sourced its own “jobs.” Xu was given some of the harshest labor, including sewing shoe soles, which often kept her up until 2 a.m. Liu made sweaters and scarfs for export, stitched lacings on ski socks, and assembled stamp albums. More often, she would need to package about 10,000 disposable chopsticks each day. There would be no sleep until the allotted quota was met. Talking wasn’t allowed, but once, Liu flashed a thumbs-up to Xu to cheer her up.

The hygiene situation on the production floor was often deplorable, according to Liu, now 67. The chopsticks sometimes came with shoe prints on them. When placing cotton swabs—another product she had to package—into plastic bags at the Beijing Women’s Prison, small insects would crawl out. The swabs would be labeled as “disinfected,” she said.

It was while at these facilities that Liu vowed never to use disposable chopsticks again.

“When people take the chopsticks to eat, they’d assume those are clean. Who would examine them that closely?” she said.

On Jan 14, three weeks ahead of the Winter Games, Xu was handed another eight-year prison term for her role in supplying photos to The Epoch Times that documented the early months of the pandemic. While following Xu’s case from New York, Liu said the news gave her inexplicable sadness.

“She already served eight years, now’s another eight,” she said.

Liu knows of others who have fared even worse: One of her friends, who didn’t cave in to authorities’ pressure to renounce her beliefs, served 12 years. Her son was 9 months old when she was jailed. When the woman was freed, the child didn’t recognize her as his mother.

“What did we do? I didn’t do anything illegal. What right do they have to imprison me for eight years?” Liu said. “It is they who are breaking the law.”

She had once posed the same questions at an arraignment hearing in 2016.

“You are committing a crime,” she told authorities.

Liu lost her mother shortly after her release in 2016. The woman had fallen unconscious following Liu’s arrest and a house raid.

“My mother didn’t have to die,” she said.

The tragedies traversing two Beijing Olympics should make plain to the international community that the regime hasn’t changed at all, Browde said.

“Too often, they would look at the high rise buildings and all the Starbucks around Beijing, and they think, ‘Oh, this is the new China,’” he said. “They just think it’s better and more civilized.

“Seeing Olympic venues right alongside prison camps … where people are incarcerated and tortured because of their faith makes the deception and the hypocrisy of the CCP very clear.”