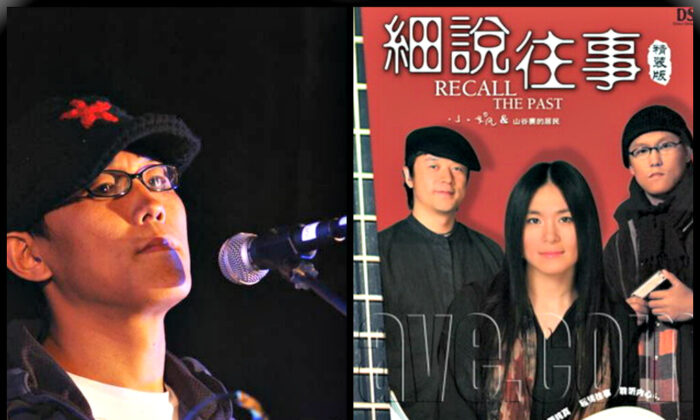 Yu Zhou and one of his band’s CD covers. Yu was arrested in the leadup to the Beijing Olympics in 2008. Eleven days later he was dead. (Minghui.org)
China Human Rights

The night he was arrested, Yu Zhou was on his way home from a gig with his band at a hotel in Beijing. A linguist who was fluent in several languages, Yu was a singer and drummer with the group, which performed folk music from various countries—sung in each nation’s native language—as well as their own original compositions.

They had released two successful CDs and appeared on television, and their songs frequently topped the charts. Yu’s star was definitely rising.

But that all came to a grinding halt on a cold night in January 2008 when he and his wife, Xu Na, a well-known award-winning artist and poet, were arrested and taken into custody.

Because they practiced Falun Gong, an ancient spiritual discipline brutally suppressed in China, the couple had previously been detained multiple times, their vehicle confiscated, and their home ransacked. Xu had even served a five-year prison term.

But Yu’s fame had granted him a certain degree of protection amidst the persecution campaign launched by the Chinese regime in 1999. However, in the approach to the 2008 summer Olympics in Beijing, the authorities stepped up the detentions of Falun Gong adherents and Yu was caught in that net.

According to the Falun Dafa Information Center, in the months leading up the Olympics, Chinese security agencies conducted large-scale arrests of Falun Gong adherents across the country, with many killed in custody within days—or even hours—of being detained.

The authorities said Yu died as a result of a hunger strike or a complication stemming from diabetes, but his family said he didn’t have diabetes. They believed he was beaten to death and asked for an autopsy in order to gather evidence, but their request was refused, according to Minghui.org.

Yu’s death made the news overseas. It was also cited by international press and advocacy organizations as an example of the Chinese regime’s campaign against Falun Gong as well as its push to suppress dissident groups ahead of the Olympics.

Yu’s loss was mourned in the Chinese blogosphere by his fans, one of whom wrote, “Another beautiful soul has left the world.”

Meanwhile, Xu Na was held in a detention center in Beijing and wasn’t even allowed out to attend her husband’s funeral. Her parents’ home was ransacked and they were regularly harassed and threatened by local police, including a warning not to talk to foreign journalists.

In November 2008, Xu was sentenced to three years in prison. At the Beijing Women’s Prison she was subjected to ongoing torture for refusing to give up Falun Gong, including force-feeding, which resulted in the loss of her front teeth.

Xu had previously suffered greatly from vicious torture during a five-year term at the Beijing Women’s Prison from 2001-2006, according to Minghui.

As well as being forced to perform intensive hard labor, she was beaten multiple times, often by seven to eight prisoners at a time. The prisoners also forced her to sit with her legs folded in the lotus position (the meditation position Falun Gong adherents use), then tied her body tightly with rope.

She was deprived of sleep, made to stay outside in the snow for long periods, and not allowed to wash for more than a month. She was also put in solitary confinement in a small, dark, and damp cell.

Minghui reports that in this type of torture, the guards handcuff Falun Gong adherents behind their backs and shackle their ankles in such a way that they can neither move nor lie down. They’re given very little to eat, rats run around at night, and they must use a bucket as a toilet. The stench in the cell can get so bad that it’s difficult to breathe.

Brainwashing sessions were also part of the mix, but despite it all, Xu held fast and refused to be “transformed”—renounce Falun Gong and quit practicing it.

Transforming Falun Gong adherents is one of the main goals of prison authorities in China, part of their attempt to wipe out the traditional practice, Minghui says. Untold numbers have died from torture, with many others rendered disabled.