Man Films Dead Bodies in Chinese Hospital, Then Finds Police at His Door 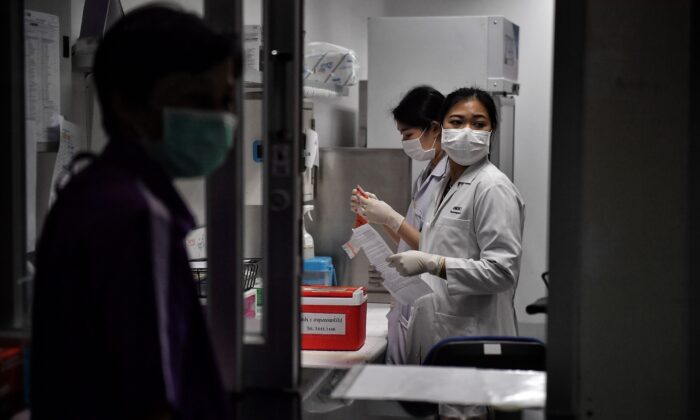 Lab technicians register samples from potential victims of the Novel Coronavirus at the Center for Emerging Infectious Diseases of Thailand at Chulalongkorn University in Bangkok on Feb. 5, 2020. (Lillian Suwanrumpha/AFP via Getty Images)
By Eva Fu

If Fang Bin, a self-described citizen journalist from the virus-stricken Chinese city of Wuhan, expected police to track him down, he didn’t expect it would happen so fast.

For days on end, he had been driving around the town, documenting every step of the way with his phone to show the life in a now locked-down city.

On the morning of Feb. 1 alone, he had visited five hospitals where doctors hustled about in the packed halls and frantic patients groaned and sobbed. At the fifth hospital, he counted eight dead bodies from a funeral van, all within the five minutes after he arrived at the hospital. Inside, a sick man moaned and gasped for breath by the bedside of his father, who had already turned lifeless. Fang uploaded all of these moments to the internet.

Around 7 p.m. that evening, half a dozen masked men wearing hazmat suits visited his property, demanding to take his temperature.

“You’ve been to dangerous places. We have to find out whether you are infected or not,” they said.

Claiming to be medical officers on duty, they said he was a “hazard” to others for going to the hospitals without proper health protection, and broke into his home. They ignored Fang’s repeated protest that his temperature was normal.

The men took away his laptop, a desktop computer, and a cellphone. The next thing he knew, he was at a police station.

The police questioned him on the videos he had released. “You ignited a nuclear bomb,” they said during the interrogation, according to Fang.

Fang said they also accused him of taking money from “foreign forces,” and threatened to quarantine him for “creating fear.”

“There should only be one voice, otherwise it will create chaos,” they told him.

He was eventually released on Feb. 2 and got his phone back.

Fang, who managed to find a bike and pedaled more than three hours home, credited social media users for their support. He said that the authorities changed their tone after seeing his videos go viral. In another post on Feb. 3, he said that he had received at least thousands of friend requests on WeChat, the popular Chinese messaging platform, adding that simply responding to the online messages took him hours.

Chinese state media had warned of dire consequences for anyone who “spread rumors.”

Citing unnamed legal professionals, the state-owned Xinhua on Jan. 26 cautioned individuals not to “fabricate and spread fake information around the coronavirus” on social media—or risk up to seven years in jail.

Fang, who also sells traditional Chinese clothes called “Hanfu” in Wuhan, argued that the key to contain the outbreak is information transparency.

On Dec. 30, Wuhan doctor Li Wenliang tried to warn his medical peers on WeChat about a mysterious virus, and was quickly placed under police investigation along with seven other medical professionals who did the same. It was one day before the Wuhan Municipal Health Commission held an emergency meeting and announced the news of the outbreak.

The police nonetheless made Li sign a statement to acknowledge his wrongdoing and promise not to repeat the “unlawful conduct.” Li was diagnosed with the virus on Feb. 2, after unknowingly treating an infected person.

Workers at crematoriums in Wuhan have described long working hours in an effort to cope with the sudden surge of bodies that need to be cremated.

Yun, who works at the Caidian Funeral Home, told the Chinese-language Epoch Times on Feb. 4 that 90 percent of the staff there were on shift 24 hours a day.

For Fang, his release also did not signal his safety at home.

On Feb. 4, people wearing hazmat suits showed up at least three times at the door. The first time at 9 p.m., they told him they were delivering vegetables to residents. Around an hour later, a different group came, identifying themselves as police officers, and began taking pictures of him. The head of the group, who Fang recognized as the head of Houhu Police Station, said he wanted to have some tea. Fang did not oblige.

Fang believes that the outbreak in Wuhan is, at least in part, a “man-made disaster.” He also said he would not give up no matter the pressure.

“As long as I’m here, I will be making videos; as long as you see my videos, it means I’m safe,” he said.