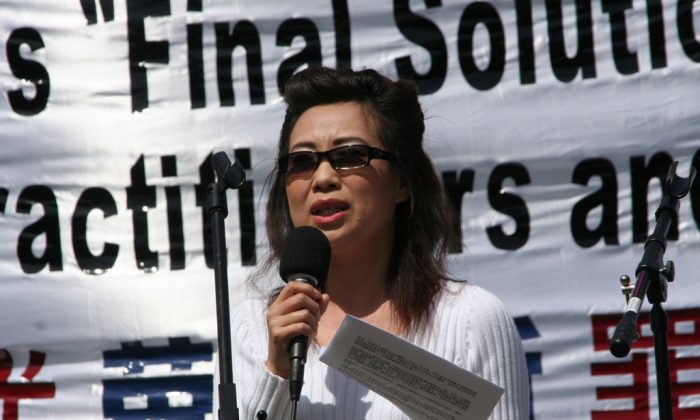 Annie (alias), ex-wife of a brain surgeon who removed organs from thousands of Falun Dafa prisoners of conscience in China in the early 2000s, speaks at a press conference in Washington, D.C., on April 20, 2006. (The Epoch Times)
China Human Rights

In 2006, a Chinese surgeon’s ex-wife, Annie (alias), revealed that her ex-husband had participated in the forcible removal of corneas from about 2,000 Falun Gong prisoners of conscience at a hospital in Sujiatun in Northeast China.

Annie, whose ex-husband is a brain surgeon, claimed he always carried a mobile phone with him and at any time it rang, day or night, he would immediately go to remove organs from Falun Gong practitioners, who were still alive at the time of extraction.

A group of surgeons worked together to remove all major organs, even the skin, and the dead bodies were cremated, Annie said. Between 2001 and 2003, about 3,000-4,000 Falun Gong practitioners died as a result of forced organ harvesting at the hospital she and her husband worked at in Sujiatun, according to estimates by some of the doctors involved, she said.

After Annie escaped to the United States, she went public with her story. Following are excerpts of her testimony in separate interviews with The Epoch Times and David Kilgour, a former MP and prosecutor in Canada.

‘Some Were Still Breathing’

“My ex-husband and I worked at the Liaoning Provincial Thrombosis Hospital in Sujiatun between 1999 and 2004. My ex-husband used to be a neurosurgeon who participated in removing organs from Falun Gong practitioners.

“Our hospital started to detain these Falun Gong practitioners in 2001, about 5,000 to 6,000 of them. Live organ removal was conducted secretly. At that time I did not know about it.

“At the beginning, fearing information could leak out, different organs were removed by different doctors in different rooms. Later on, when they got money and they were no longer afraid, they started to remove the organs together.

“[My husband] was asked to help out [with organ removal] in other hospitals. Every time he did this, he got lots of money and cash awards—several dozen times his normal salary … hundreds of thousands of U.S. dollars.

“This whole scheme and the trading of organs was organized by the government health system. The doctors’ responsibility was simply to do what they were told to do.

“There are a lot of hospitals in China that do this. They have removed organs from many living Falun Gong practitioners in secret.”

‘You Have No Idea of My Agony’

“I found out about this at the end of 2003. At the time my husband had become absent-minded and almost robotic. He had been doing it for years but had never told me about it. He often had terrible nightmares and would wake up shrieking and terrified. He would stare blankly at the TV. When our child or I touched him, he would shriek. I found him becoming abnormal.

“He told me, ‘You have no idea of my agony. These Falun Gong practitioners were alive. It would be okay if we removed organs from dead bodies, but these people were truly alive.’

“There were a lot of transfers in and out of our hospital. Some doctors felt very pained after they had done it. Some were transferred elsewhere. Some changed their names and moved elsewhere. Some went abroad. Some may have been killed to eliminate evidence.

“Some other people know about it but do not dare to speak up, as they are afraid of being killed.

“In 2004, I asked my husband quit his job and he agreed. However, quitting put him in mortal danger. … We received threats by phone at home and we were the target of an assassination incident. … My family decided to run away from everything by moving abroad.

“I have divorced my husband because I cannot accept that fact that he removed organs from Falun Gong practitioners. I myself have been severely traumatized and devastated.

“This is a state crime. I know this is the state that is committing the crimes. I know I alone will not be able to change this, but I know a lot of doctors will step out. I truly hope that these doctors, after hearing my heartfelt testimony, will act according to their conscience.”