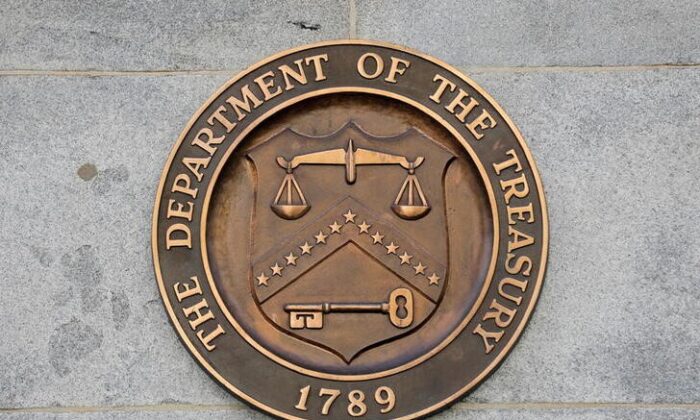 Signage is seen at the United States Department of the Treasury headquarters in Washington, on Aug. 29, 2020. (Andrew Kelly/File Photo/Reuters)
Economy

The United States government has posted a budget surplus for January 2022, the first time in over two years, displaying a considerable change over the deficit registered during the same month last year as government revenue collection improved post-pandemic.

For January 2022, the United States posted a $118.70 billion surplus, up from a deficit of $162.83 billion posted in January 2021, a report from the Treasury Department showed. During the early months of the pandemic when unemployment levels began to hit high levels and the economic outlook was vulnerable, the government implemented several relief programs.

This led to the country registering a record $3.1 trillion annual deficit in September 2020. But in recent months, government programs to support the unemployed have ceased and the state’s revenue collection improved as more people returned back to work.

This is the first monthly surplus since September 2019 when the government posted a $82.77 billion surplus. The administration has been posting budget deficits for the past 27 months. The biggest deficit during this time occurred in June 2020 when the government reported a deficit of $864.07 billion. The January 2022 figure is also the biggest surplus since April 2019 when Washington registered a surplus of $160.30 billion.

For the first four months of fiscal year 2022 which began on Oct. 1, the government incurred a deficit of $256.00 billion, which is 65 percent lower than the deficit of $735.73 billion incurred during the same period in the previous fiscal year.

“Hitting the $30 trillion mark is clearly an important milestone in our dangerous fiscal trajectory. … For many years before COVID, America had an unsustainable structural fiscal path because the programs we’ve designed are not sufficiently funded by the revenue we take in,” Michael A. Peterson, the chief executive officer of the Peter G. Peterson Foundation, which promotes deficit reduction, said to the NY Times.

In December, Congress voted to pass the country’s debt ceiling limit, raising the borrowing limit by $2.5 trillion. This is believed to be enough to prevent the country from slipping into default at least until early 2023. The massive debt obligations will also play spoilsport to President Biden’s plans to pass the $2 trillion safety net and climate spending proposal.