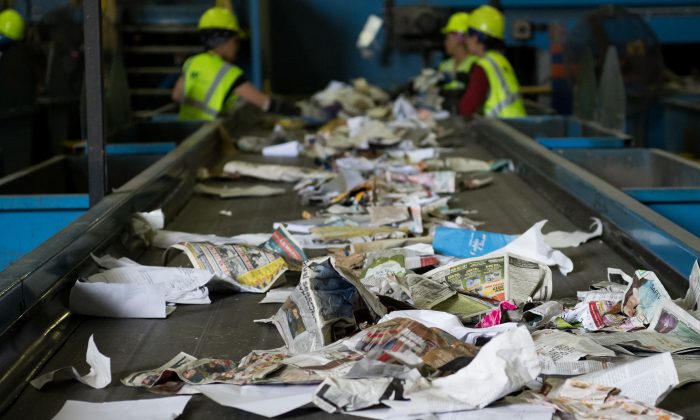 US Recyclers Begin Road to Recovery After China Bans Recyclables

NEW YORK — In 2017 recycling facilities across the United States received some unwelcome news: China, the world’s largest importer of scrap material, will stop accepting their waste.

GDB International, a New Jersey-based recycling company, was among numerous operators faced with the problem of deciding what to do with piles, and piles of plastic that used to go to China.

But more than one year on, the company has turned its fortunes around. Rather than sending the plastic to China, it now recycles the material itself.

The import bans have been a “blessing in disguise” for the company, said Sunil Bagaria, president and co-founder of GDB International.

The company previously collected and sorted recyclables, such as papers and plastics, from big companies, which it sold to businesses that converted the scraps into raw materials for manufacturing. Like many sorting facilities, the company sent most of its mixed plastics — around 4,000 tons a month — to China.

The ban, however, prompted the company to install recycling lines in three of its warehouses in New Jersey, Bagaria said.

“We are closing the loop here itself, within the country,” he said.

With the new processes, the company now cleans, grinds, and convert the plastics it collects into pellets. It then sells these to manufacturers in the U.S. and overseas.

Bagaria said the company is now producing around 2 million pounds of pellets a month, and plans to expand this capacity to warehouses in other states during 2019.

He added there is more value in being able to offer U.S. companies closed-loop recycling solutions.

“There is more money to be made by doing [the recycling ourselves] … a lot of big corporations want to make their packaging out of recycled plastics because it’s good for their marketing efforts.”

GDB International was not the only company affected by China’s ban on scrap materials. Up until 2018, China imported around 40 percent of the country’s recyclables.

As part of an anti-pollution policy dubbed National Sword, the Chinese regime announced to the World Trade Organization (WTO) it would ban 24 streams of solid waste including mixed paper and post-consumer plastics. The import bans took effect from January 2018.

For other waste materials such as cardboard and metal, China set the contamination level to 0.5 percent—a benchmark too stringent for most facilities in the U.S. to meet.

The Chinese regime told the WTO the restrictions were necessary to protect public health, and the environment. It has since signalled an intention to ban all imported recyclables by the year 2020.

The ban created an oversupply of scrap materials worldwide, causing commodity prices to plummet, and left many U.S. recyclers scrambling to find alternate markets at home and abroad.

Some facilities started stockpiling papers and plastics, while many were forced to send practically worthless material to the landfill, putting a spotlight on the viability of the industry.

“China being the largest market certainly shed light on some of the vulnerabilities, and inefficiencies in [the U.S. recycling] market,” said Adina Renee Adler, senior director at the Washington-based Institute of Scrap Recycling Industries.

But 10 months into the ban, the industry is showing signs of adjustment. Recyclers are working to reduce contamination, and increasing its efforts to educate households and businesses on what they can and cannot recycle.

The worldwide oversupply of scrap material coupled with the strict contamination standard set by China has spurred a heightened focus on purity throughout the industry.

“Any buyer of recyclables right now has the ability to demand an extremely high-quality material,” said Susan Robinson, federal public affairs director at Waste Management, an environmental services company with operations across the country.

As a result Waste Management and other recyclers, Robinson said, have had to invest in upgrades to sorting equipment, extra labor and additional processes at facilities to ensure contaminants, such as plastic bags, are screened from the final product.

“It’s driven up our cost and, at the same time, the commodity value that we’re selling has dropped by over half,” Robinson said.

These measures have particularly impacted smaller facilities. At Burbank Recycling Centre in Burbank, California, Recycling Co-ordinator Kreigh Hampel said the facility had to hire more labor, and install a new inspector position to review bales from the facility.

“The workers have been instructed to sort differently. The inspectors have to show performance on the back-end of the process that we’re meeting a certain grade of material,” Hampel said.

Robinson said about 25 percent of the material Waste Management collects is not recyclable, prompting the company to work with households and companies to ensure the right items go into the recycling cart.

“There’s an enormous amount of effort [on the part of] the entire industry to educate, to raise awareness, and to really focus on the quality of recyclables we’re collecting,” Robinson said.

The Recycling Partnership is an industry funded non-profit that helps communities improve their recycling programs.

“We work on behavior change at the cart,” said Dylan de Thomas, Vice President of Industry Collaboration at The Recycling Partnership. “Ultimately the goal is to give feedback to the resident.”

Since the import ban the organization has seen a significant rise in demand for its services, he said.

Non-profit works with municipalities and recycling facilities to identify a contaminant for target of a public messaging campaign. This is followed-up with workers who sweep the streets, and tag carts that contain the contaminant with an “oops” tag. Haulers do not pick up carts that are tagged.

“The next time the recycling truck goes down, what we found is that people then don’t leave those [contaminants] in [the carts],” de Thomas said.

The program has been run in hundreds of communities, he said, and led to drops in contamination rates by as much as 57 percent.

Future Is a Quality Focus

Robinson said while it may take a few years for markets to fully adjust, the shift to quality production will be beneficial in the long run.

“I think [the change] will make for sustainable programs that really are the right environmental programs for our local communities, as well as for the market as a whole,” she said.

Bagaria said the China ban will force the country to transform how it deals with its waste.