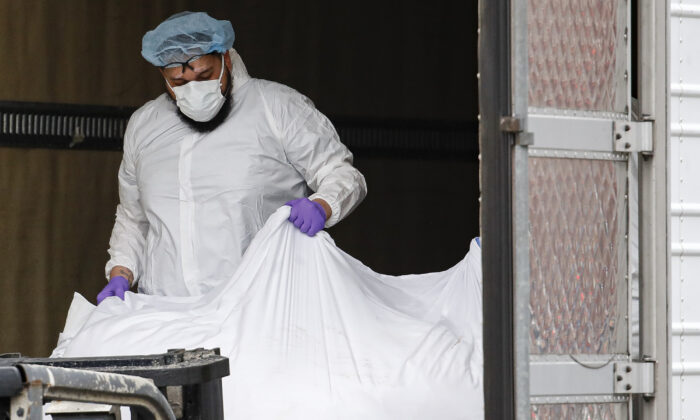 A body wrapped in plastic is loaded onto a refrigerated container truck used as a temporary morgue at Brooklyn Hospital Center in New York City, on March 31, 2020. (John Minchillo/AP Photo)
US News

The United States recorded the highest-ever daily death toll from COVID-19 outside China, at 1,321 fatalities between April 2 and April 3, according to statistics site Worldometers.

The figure excludes China due to persistent doubts about the reliability of state-reported figures.

According to the tracker, 6,071 people in America lost their lives due to the disease as of Thursday, while on Friday that count increased to 7,392.

Another running tally maintained by Johns Hopkins, which uses different sources and updates data at different times, puts America’s COVID-19 death count at 7,159 as of Friday.

Both statistics services showed on Saturday that more than 277,000 Americans have tested positive for the Chinese Communist Party (CCP) virus, commonly known as novel coronavirus.

Two of the principal U.S. CCP virus hot spots—New York and Louisiana—reported their biggest jumps in deaths yet on Friday.

Surging deaths in New York City and New Orleans showed that a wave of lethal CCP virus infections is expected to overwhelm hospitals.

Governors, mayors, and physicians have voiced alarm for weeks over crippling scarcities of personal protective gear for first responders and frontline healthcare workers, as well as ventilators and other medical supplies.

Cities across the country have also scrambled to expand hospital capacity and recruit healthcare professionals out of retirement to meet looming shortages of sick beds and personnel.

Overcrowded mortuaries are another problem as cities struggle to meet demand for storage of the dead and families wrestle with rules on social distancing that make the usual funeral rituals impossible.

Med Alliance Group, a medical distributor in Illinois, has been besieged by calls and emails from cities around the country requesting refrigerated trailers for storage of bodies.

The company has rented all its trailers and there’s an 18-week wait for new materials to build more, she said.

With both medical experts and the White House now estimating the death toll from the CCP virus pandemic could reach 240,000 nationwide, the sheer practicalities of death—where to put the bodies—are worrying just about everyone as cities, hospitals, and private medical groups clamor to secure additional storage.