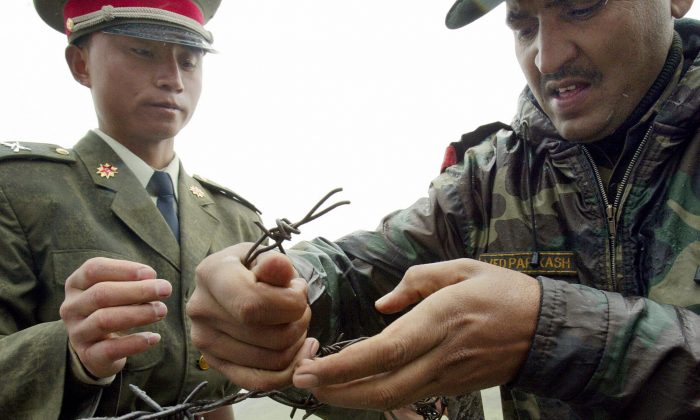 A file photo of a Chinese and an Indian soldier at Nathula pass, in east Sikkim in India. ( Deshakalyan Chowdhury/AFP/Getty Images)
US News

President Donald Trump said the United States is willing to mediate between India and China to help them resolve their ongoing border dispute. His comments came on May 27 as tensions started escalating between the Indian and Chinese militaries along their disputed border two weeks ago.

“We have informed both India and China that the United States is ready, willing, and able to mediate or arbitrate their now raging border dispute. Thank you!” said Trump in a message on Twitter.

India and China share a disputed border called the Line of Actual Control (LAC) and for decades the Indian army and China’s People’s Liberation Army (PLA) have faced each other in many standoffs at various locations along the LAC.

The recent dispute happened in the border regions of Ladakh and Sikkim in separate incidents in early May. The two militaries were engaged in a violent face-off in eastern Ladakh on May 5—an incident that involved 250 soldiers in a fight from both sides and injured 100 PLA soldiers.

According to India Today, an Indian national media, since then the PLA has erected about 100 tents in the Galwan Valley in Ladakh and brought in heavy equipment to construct military bunkers.

Aparna Pande, a Research Fellow and Director of Hudson Institute’s Initiative on the Future of India and South Asia in Washington, told The Epoch Times that neither India nor China has sought any intervention from the United States or the international community but Trump’s offer will upset China.

“Beijing will be more upset about this offer by President Trump than Delhi because in effect the U.S. is treating India and China as equals and that is something Beijing has never accepted,” she said.

Indian strategic analysts, Brahma Chellaney said Trump should be condemning Chinese aggression on the Indian border rather than offering to mediate.

“There is a longstanding Himalayan border dispute. But what has unfolded now is Chinese aggression across the Line of Actual Control (LAC) with India. Instead of offering to ‘mediate or arbitrate,’ Trump ought to be condemning China’s change of status quo,” said Chellaney in a message on Twitter on Wednesday.

Chellaney said that China is seeing the pandemic as an opportunity for its expansionist agenda.

Pande said Chinese leadership is trying to deviate the world’s attention from the pandemic by such aggression on its disputed border with India.

“China has built a lot of infrastructure on its side of the border over the years. India has been slow to do that but in the last few years, India has done a lot” of airstrips, all-weather roads, etc.

“China’s belligerent actions are an attempt to prevent India from bolstering its side of the border. Beijing is hoping the world’s attention will be diverted by COVID.”