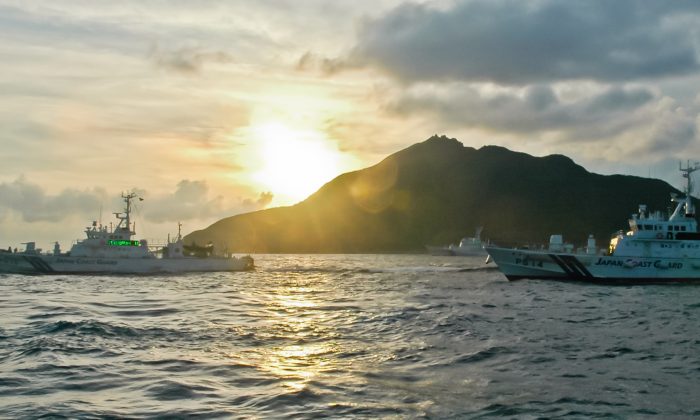 Japanese Coast Guard ships are seen from a Chinese ship near the Senkaku Islands in the East China Sea Aug. 18. China recently established an air defense zone, which encompassed the islands, and the United States wants Chinese leaders to explain why. (AP Photo/Emily Wang)
China

China has been growing more aggressive in regional disputes with its surrounding countries. On Saturday it may have just stepped over the line.

China created a so-called air defense zone over international water and Japanese islands. It threatened military action against any who enter the zone and do not cooperate with Chinese authorities.

On Tuesday, the U.S. military put China’s threats to the test. It flew two B-52 bombers—some of the largest, loudest planes the United States has—across the international waters claimed by China.

By doing so, the United States did two things: it made clear to surrounding countries that China’s claims to the waters are unfounded, and it reaffirmed the U.S. commitment to its allies.

During Vice President Joe Biden’s visit to the Asia-Pacific next week, he plans to meet with Chinese leaders. On the agenda, the United States wants to know why China formed its “Air Defense Identification Zone,” and why now.

“We have real concerns with this move by the Chinese because it raises serious questions about their intentions,” said a senior administration official during a Wednesday White House press briefing.

“It causes friction and uncertainty,” the official said. “It constitutes a unilateral change to the status quo in the region, a region that’s already fraught.”

The official said during Biden’s upcoming trip, the recent incident will allow him “to make the broader point that there is an emerging pattern of behavior by China that is unsettling to China’s own neighbors, and raising questions about how China operates in international space and how China deals with areas of disagreement with its neighbors.”

Until recently, there was uncertainty as to whether the United States would stand with Japan to defend the Senkaku Islands, which are owned by Japan but claimed by China and Taiwan.

The Senkaku Islands, called the Diaoyu Islands by China, have been owned by Japan since 1895. They came under U.S. control after World War II, but were returned to Japan in 1972 with the Ryukyu Island chain, which includes Okinawa. The disputed islands later came under private ownership, and Japan purchased them in April 2012.

China’s formation of the ADIZ comes amid growing tensions with Japan over China’s territorial claim to the Senkaku Islands.

Following Abe’s orders, Chinese Defense Ministry spokesman Geng Yansheng said if Japan shot down one of its UAVs, it would be an act of war.

The U.S. official said, “I would just underscore that the Vice President will make clear that the United States has a rock-solid commitment to our allies,” the official said.