US Probing Whether Wuhan Virus Came From Lab in China 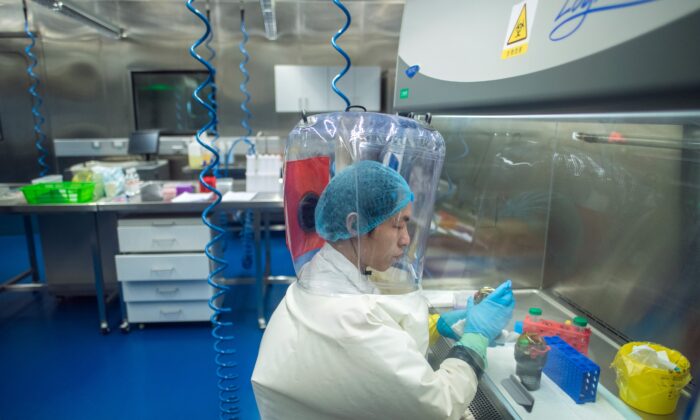 A worker is seen inside the P4 laboratory in Wuhan, capital of China's Hubei province, on Feb. 23, 2017. (Johannes Eisele/AFP via Getty Images)
By Zachary Stieber

The United States is probing whether the CCP virus came from a high-level laboratory in the same Chinese city it emerged in last year.

The CCP (Chinese Communist Party) virus, a novel coronavirus, originated in Wuhan, a city of some 12 million, in 2019 before spreading around the world. The virus is also known as the Wuhan virus.

Top American officials confirmed this week that U.S. intelligence is looking into whether the P4 lab in the city is the source of the virus, which causes a disease that has killed tens of thousands worldwide.

Asked whether U.S. officials have told him the virus likely originated from the lab, President Donald Trump told reporters that “more and more, we’re hearing the story.”

“We are doing a very thorough examination of this horrible situation that happened,” he said Wednesday during the daily White House briefing on the CCP virus in Washington.

Trump declined to give details on what he talked to Chinese leader Xi Jinping about regarding the lab.

Secretary of State Mike Pompeo said during an appearance on Fox News’ “The Story” later in the day that the lab sits close to where the outbreak started.

“What we do know is we know that this virus originated in Wuhan, China,” Pompeo said. “We know there is the Wuhan Institute of Virology just a handful of miles away from where the wet market was. There is still lots to learn. The United States government is working diligently to figure it out.”

“The Chinese government needs to come clean and needs to be accountable,” he added. “It needs to explain what happened and why it is the case that that information wasn’t made more broadly available.”

Gen. Mark Milley, the chairman of the Joint Chiefs of Staff, told reporters Tuesday that American officials “have taken a keen interest” in the origin of the virus and intelligence personnel have taken “a hard look” at it.

China continues withholding information about the virus, Secretary of Defense Mark Esper said during an appearance on Fox on Wednesday. Esper declined to comment directly on reporting the outbreak originated in the lab but added: “Most people believe it began naturally—it was organic, if you will.”

“I think in due course, once we get through the pandemic we’re in right now, there’ll be time to look back and really ascertain what happened and make sure we have a better understanding so we can prevent this in the future,” he said.

The Epoch Times debuted a documentary earlier this month looking into the origin of the Wuhan virus. Senior investigative reporter Joshua Philipp found most early patients in China had no link to a wet market, an exotic animal market that communist officials have tried pinpointing as the origin.

Philipp cited journal reports that showed high similarity between the new virus and two viruses sampled from bats by the Chinese military and a similar spike protein from SARS to SARS-CoV-2, or the CCP virus.

“The high similarities from the S-proteins from SARS one to SARS two, that’s the lock and key. That’s what drives it right through human cells,” Judy Mikovits, a molecular biologist who formerly directed the Lab of Antiviral Mechanisms at the National Cancer Institute, told The Epoch Times. “This is again evidence that it couldn’t go through the Wuhan seafood market.

Philipp also focused on Shi Zhengli, a Chinese virologist who published four papers about research into the capacity of coronavirus transmission across species, focusing on the spike protein.

The research “signified that Shi Zhengli had unearthed the passageway for coronaviruses into human bodies,” Philipp said. Shi was deputy director at the Wuhan Institute of Virology until earlier this year, after the pandemic started. A top army official assumed control of the lab in February.