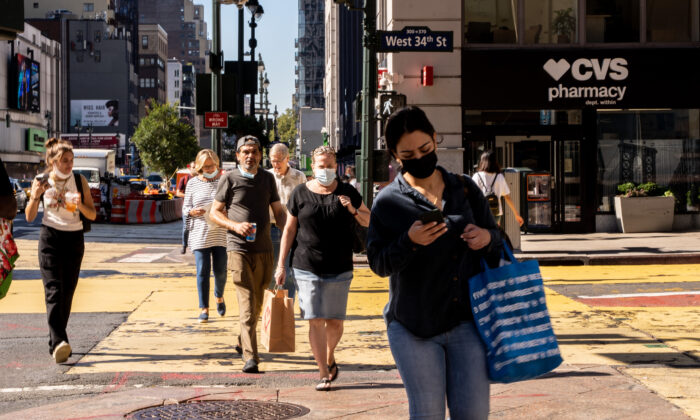 The United States’ population grew 0.1 percent in the year ending in July, the lowest rate on record, according to figures released by the Census Bureau on Dec. 21.

The population grew by 392,665 people between July 1, 2020, and July 1, 2021, according to the Census estimate. U.S. growth was caused by a natural increase of 148,043 and a net international migration of 244,622, which is the first time that migration surpassed the natural increase, the agency noted.

The bureau stated that the “slow rate of growth can be attributed to decreased net international migration, decreased fertility, and increased mortality due in part to the COVID-19 pandemic.”

“Between 2020 and 2021, 33 states saw population increases and 17 states and the District of Columbia lost population, 11 of which had losses of over 10,000 people. This is a historically large number of states to lose population in a year,” the Census Bureau added.

Texas experienced the largest increase in total population, the bureau said, while Idaho’s population grew at the fastest rate in the United States. Texas, California, and Florida still have populations above 20 million people; New York state dropped below that number last year.

Among states that gained people, Idaho led the way with 2.9 percent, Utah had a 1.7 percent increase, and Montana’s population increased by 1.7 percent, the figures revealed.

The agency noted that even before the pandemic, U.S. population growth had been slowing. Birth rates have been steadily declining since the 2007 to 2009 recession.

“Population growth has been slowing for years because of lower birth rates and decreasing net international migration, all while mortality rates are rising due to the aging of the nation’s population,” Kristie Wilder, who works as a demographer in the Population Division at the Census Bureau, said in a statement.

“Now, with the impact of the COVID-19 pandemic, this combination has resulted in a historically slow pace of growth,” Wilder added.

In August, data released by the Census Bureau showed that the U.S. white population shrank for the first time in history.

America’s population also grew by just 7.4 percent during the previous decade, which is the second slowest growth on record, the August data revealed. The population grew to 331.4 million in 2020 from roughly 308.7 million in 2010. Only the decade spanning the 1930s—when the Great Depression occurred—had a slower growth rate.