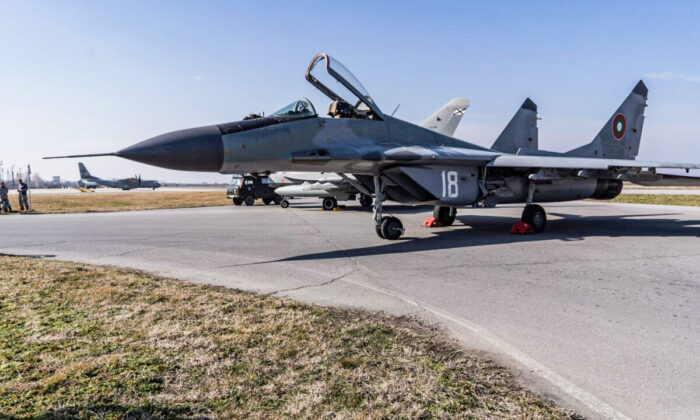 US, Poland in Discussion to Provide Ukraine With Fighter Jets, Biden Admin Says

U.S. Secretary of State Antony Blinken confirmed on Sunday that Washington is discussing with Warsaw a proposal that would allow Ukraine to obtain warplanes from Poland to defend its skies from Russian assault.

Under the proposed three-way deal, Poland would provide Ukraine with its aging Mikoyan MiG-29 fighter jets and in return, have its hangars refilled by the United States with American-made F-16s.

The Polish Air Force, which has been retiring MiG-29s and purchasing F-16s since early 2000s in an effort to modernize its arsenal and reduce its reliance on Russian equipment, currently operates both types of aircraft.

“We are looking actively now at the question of airplanes that Poland may provide to Ukraine and looking at how we might be able to backfill should Poland decided to use those—to supply those planes,” said Blinken during a press conference with Moldovan President Maia Sandu. “I can’t speak to a timeline, but I can just tell you we’re looking at it very, very actively.”

Blinken added that Washington has provided over a billion dollars in security assistance to Kyiv over the past year, and is working with Ukrainian officials to “get an up-to-the-minute assessment of their needs.”

Blinken’s remarks come days after mixed messages from Europe, including the suggestion that members of the European Union, particularly those that were part of the Eastern Bloc during the Cold War, would transfer to Ukraine Soviet-era jets Ukrainian pilots know how to fly.

“[Ukrainian Foreign] Minister Kuleba has been asking us that they need the kind of fighter jets that the Ukrainian army is able to operate. And we know what kind of planes, and some member states have these kind of planes,” Josep Borrell, the EU’s top representative for foreign affairs, said at a Feb. 27 press conference, in what appeared to be a reference to former Eastern Bloc countries such as Poland.

Shortly after the conference, The Ukrainian parliament alleged that three EU members responded to the call and pledged to donate their Russian-made jets, including 28 MiG-29s from Poland, 12 from Slovakia, and 16 from Bulgaria, as well as 14 Sukhoi Su-25s from Bulgaria. Defense officials of Bulgaria and Slovakia have since clarified that they were not planning to make such a donation.

In a March 1 appearance at a NATO air base in Łask, Poland, Polish President Andrzej Duda was specifically asked whether the MiGs had been delivered to Ukraine. Duda responded that NATO would not move planes into Ukrainian airspace.

“We are not sending any jets to Ukraine because that would open a military interference in the Ukrainian conflict,” he said. “We are not joining that conflict. NATO is not a party to that conflict.”