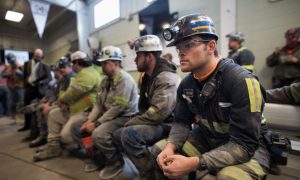 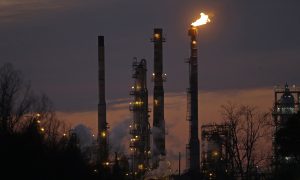 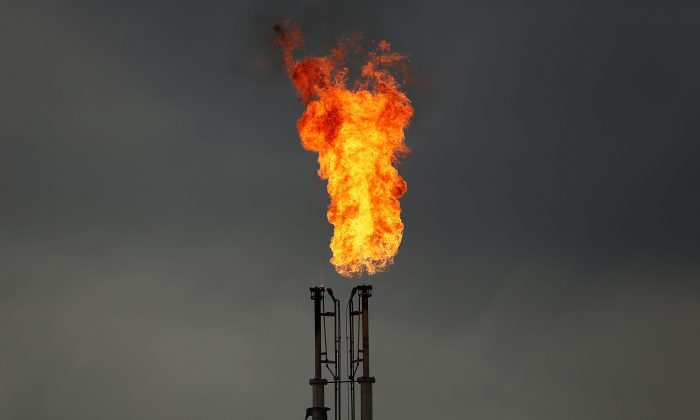 Natural gas is flared off at a plant outside of the town of Cuero, Texas, on March 26, 2015. (Spencer Platt/Getty Images)
US News

With low liquid natural gas (LNG) prices making U.S. exports an increasingly attractive option for other nations’ electricity generation, industrial processes, and space heating, a string of LNG infrastructure projects around the world are indicating where the LNG market could develop in the coming years.

Indeed, if the Trump administration’s LNG policy of facilitating the development of pipelines and export terminals continues to be mirrored by the construction of corresponding port, storage, and regasification infrastructure internationally, a host of new markets could open up for American fuel products.

It remains to be seen, however, whether U.S. gas companies can weather the storm of historically low prices exacerbated by a mild winter across Europe and Asia and a fall-off in Chinese demand as a result of the coronavirus.

Low prices in recent months, however, have piqued the interest of potential customers around the world and spurred investment plans in LNG terminals and regasification infrastructure.

A report (pdf) from fossil fuel giant Shell this week was overwhelmingly positive about LNG’s prospects. Shell’s Integrated Gas and New Energies Director Maarten Wetselaar said: “Record supply investments will meet people’s growing need for the most flexible and cleanest-burning fossil fuel. While we see weak market conditions today due to record new supply coming in, two successive mild winters, and the coronavirus situation, we expect equilibrium to return, driven by a combination of continued demand growth and reduction in new supply coming on-stream until the mid-2020s.”

The Shell report predicts that demand for LNG could double by 2040.

In his 2020 State of the Union address on Feb. 4, President Donald Trump said: “We have unleashed a revolution in American energy. The United States is now the number one producer of oil and natural gas anywhere in the world. And now, for the first time in 65 years, we are a net exporter of energy.”

According to U.S. Secretary of Energy Dan Brouillette: “America has become energy independent this year, leading the world in oil and natural gas production as well as carbon emissions reductions, notably surpassing every Paris Accord signatory. While exporting LNG to 37 countries across five continents, we are sharing our energy bounty with our allies around the world.”

The U.S. government has also warned the European Union against becoming too reliant on Russian gas supply giant Gazprom, and stated that boosting LNG imports from the United States and other sources would help ensure European energy security.

On Feb. 10, the U.S. Department of Energy announced that it was authorizing four proposed LNG export facilities in Texas—three in Brownsville and one in Corpus Christi.

“The Trump administration recognizes the importance and increasing role U.S. natural gas has in the global energy landscape,” said Brouillette. “The export capacity of these four projects alone is enough LNG to supply over half of Europe’s LNG import demand. With today’s authorizations, we are paving the way for more U.S. natural gas exports to bring energy security and prosperity to our allies around the world.”

During a visit to the Portuguese port of Sines last week, Brouillette said the facilities there could be a stepping stone for the development of American LNG supply in the region.

Plans to expand Sines LNG terminal facilities would therefore create “an enormous opportunity for U.S. industry, as well as the government,” Brouillette told The Associated Press.

“This is the closest [European] port to the U.S.,” Brouillette said.

Sines, an industrial town and Portugal’s main deepwater port and logistics hub, is situated some 90 miles south of Portugal’s capital, Lisbon. Broulliette said he believes the port “serves as an important gateway to Europe.”

Sines accepted its first shipment of American LNG in 2016, and the Portuguese government believes that a pipeline from Sines could supply gas to Spain and France, though regulators in those countries have expressed their opposition.

The European Investment Bank (EIB) announced this week that it had signed a $45 million loan agreement to upgrade the port facilities at Ystad on Sweden’s southern-most coast. Located close to the cities of Malmö, Sweden, and Copenhagen, Denmark, the port at Ystad will be deepened and extended to accommodate larger LNG tankers.

According to a report, New York-based energy infrastructure company New Fortress Energy LLC also announced this week that it has inked a deal with two Nicaraguan electricity grid companies on a 25-year power purchase agreement (PPA). The deal means that New Fortress will build a 300-megawatt natural gas-fired power plant near Puerto Sandino on Nicaragua’s west coast, with the plant requiring an offshore LNG terminal to receive, store, and regasify the fuel. The project adds to the company’s LNG portfolio, which boasts undertakings in Jamaica, Mexico, Ireland, and the United States.

US Support for 3 Seas Initiative

Pompeo said the new U.S. commitment would “provide up to $1 billion in financing to Central and Eastern European countries of the Three Seas Initiative.” The goal is “to galvanize private sector investment in the energy sector to protect freedom and democracy around the world,” said Pompeo.

The Three Seas Initiative is a political platform that seeks to unite 12 Central and Eastern European countries along a strategic belt between the Adriatic, Baltic, and Black Seas in an endeavor to build a north-south infrastructure corridor that would connect and strengthen the countries of the region.

Engaging discussions at the Three Seas Initiative roundtable to close out #MSC2020. It is my strong conviction that through the Three Seas initiative, baltic countries are of tremendous geopolitical value in the continued advancement of Western democracies. pic.twitter.com/M5dut4mFmf

Most Three Seas participants used to be part of the former communist Eastern Bloc, which was dominated by the Soviet Union. Their infrastructure was therefore not only underdeveloped in comparison with Western Europe, but also focused mainly on interconnections along east-west axes, which was a major impediment to economic growth in the region. In terms of energy, moreover, the region remained dependent on a single supplier of gas and oil—Russia.

Included in the Three Seas Initiatives are projects to create an energy market that will provide diversification of energy sources and suppliers, and one of the new energy suppliers to countries participating in the initiative is an American producer of LNG.

According to a report from S&P Global Platts, Europe’s largest gas field—the Groningen field in the northeastern part of the Netherlands—will cease production in 2022, some eight years ahead of schedule. However, Platts states that the shortfall will easily be covered by increased Russian pipeline capacity and LNG deliveries to North Sea terminals.

American suppliers will not have it all their own way, however. Qatar Petroleum announced this week that it will supply up to 3 million tons of capacity per annum to the Montoir-de-Bretagne LNG facility of French gas and electricity group Engie, with the deal running until 2035. The facility is located near Nantes on France’s Atlantic coast.

With reporting by Ella Kietlinska.